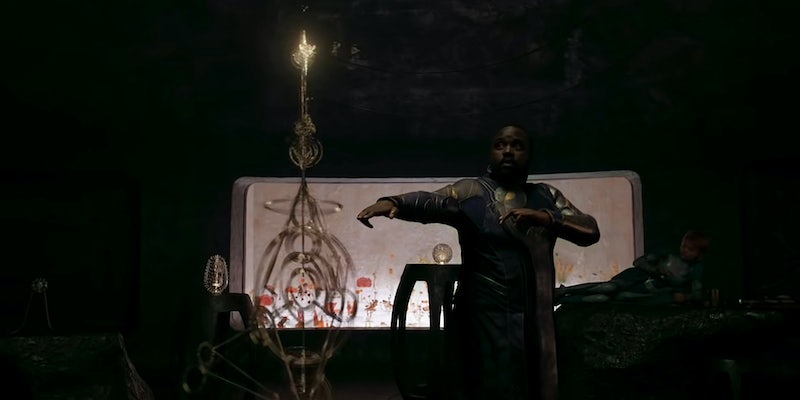 Is the MCU’s first gay superhero a war criminal?

Fans are concerned about a rather bizarre scene mentioned in some 'Eternals' reviews.

This post includes one minor spoiler for Marvel’s Eternals.

The MCU‘s first gay superhero was always going to be a topic of debate, but we weren’t expecting… this. In the wake of early reviews for Eternals, some fans are concerned that Phastos (Brian Tyree Henry), the film’s gay character, is being portrayed as a war criminal. Specifically, there’s a scene where he tearfully takes responsibility for the Hiroshima bombing.

As is often the case on social media, this story has been garbled by word of mouth. Most people haven’t seen Eternals yet, but fans on Twitter came across the “Phastos did Hiroshima” idea via a quote from the New York Post review. This led a lot of people to assume that Phastos literally bombs Hiroshima, when his role is more abstract. He’s essentially the patron god of technology, and after thousands of years of helping human civilization develop, he’s horrified by the destructive impact of the bomb. So he feels guilty and responsible, but he didn’t actually participate in the war. In fact, the Eternals are forbidden from interfering in human conflicts.

The main response to this Phastos scene was cynical amusement, although some people were genuinely offended. It almost seems like a parody of MCU controversies, since Marvel is often criticized both for its attachment to the US military and for its lack of LGBTQ+ representation.

While “Marvel’s first gay superhero is a war criminal” makes for a pithy reaction post, it’s not actually accurate. However, even in context, that scene is pretty bizarre. It literally uses the rubble of Hiroshima as a backdrop for Phastos’s character development. But it doesn’t come across as bad for Phastos himself (one of the film’s most engaging characters) so much as bad for the concept of Eternals overall.

The main conflict of Eternals is the moral dilemma faced by its main characters: As immortal, superpowered beings, should they break their vow not to interfere in human wars and tragedies? The obvious answer seems to be “yes” (that’s the whole point of superheroes!) but the Eternals spend 7,000 years refusing to intervene in genocide and slavery. So while the Hiroshima scene is awkward, it arguably makes Phastos look better than the other Eternals. He’s the only one to have a major emotional breakdown over his passive role in human atrocities.