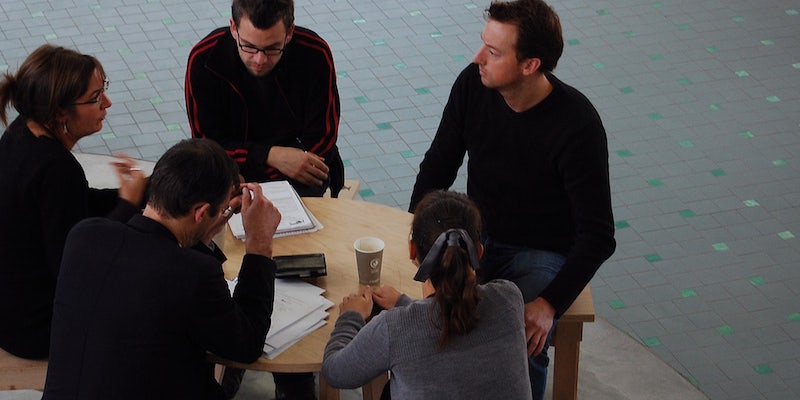 Photo via Simon Blackley/Flickr (CC BY 2.0)

Even the CEO of a company with "unconscious bias training" can't get it together on sexism.

Eric Schmidt’s manterruption at SXSW is blowing up feminist tech headlines this week—and with good reason, because the industry’s serious gender trouble is becoming a national subject. Meanwhile, Lebanese television host Rima Karaki is making headlines of her own thanks to her forceful moderation of a male guest who was being less than respectful on Al-Jadeed TV. And then, of course, there’s Kanye West and the notorious “imma let you finish.” As Rick Astley would put it, when it comes to interrupting women, men are never gonna give it up.

The phenomenon of jumping in while women are speaking to take control of a conversation, redirect it, assert superior knowledge, or generally make a nuisance is a widespread problem for women in every industry and setting. It happens in meetings, at presentations and panels, at the dinner table, and in the bedroom, for that matter. Manterruption joins a family of portmanteaux describing the frustration of the female experience, including mansplaining, manspreading, and bropropriating.

For women, conversation is a battlefield and they need to fight for every inch.

Schmidt’s case is particularly appalling because Google has touted its “unconscious bias” training, which is designed to address issues just like this one. In response to biases in tech, including racism, sexism, and transphobia, the Silicon Valley firm has been creating training for employees led by women like Judith M. Williams—yes, that would be the woman who broke in on Schmidt to ask about sexism and workplace dynamics.

It was truly an “of all the companies in all the world” moment. Here’s the CEO of Google, a company that positions itself as an industry leader when it comes to equality for its employees, and he can’t even control himself on an SXSW panel. Megan Smith, his co-panelist, is an extremely well-qualified woman who knows what she’s talking about; you don’t end up on a SXSW panel because you can reset the password on your router without assistance. Yet, Schmidt seemed to feel that what he had to say was more important than what she had to say. Sounds like someone needs some unconscious bias training.

Rima Karaki, meanwhile, was faced with perhaps the ultimate manterruption when the host was told to “be silent” by the Islamic cleric speaking on the show after she asked him to refocus. Aside from the sheer misogyny of the statement, it was also a nonsensical one: She’s the host of the program. She’s the one who’s supposed to be talking, and it’s her job to redirect guests who wander off on tangents.

Her decision to cut his mic went viral. The move was rooted in self-respect, she told the Guardian, and it resonated with women around the world who’ve longed to be able to mute men who aren’t behaving respectfully. Female journalists, Karaki pointed out in her Guardian interview, face many more challenges than their male counterparts, because they have to deal with sexism on top of everything else.

Just like mansplaining, manterruption is all about gender politics. The phenomenon reflects the belief that women are worth less, socially, than men, and that their voices are more important. That’s reinforced by punishments for women who assert themselves in conversations like negotiations. When women fight back, they’re inevitably slapped with the “bitch” label, creating a hostile environment that normalizes interruption.

In a study conducted at George Washington University, researchers noticed something very interesting as they analyzed conversations between women and men. Women, overall, tend to be interrupted more than men, not exactly rocket science. They discovered something else of note, though: The gender of the person doing the interrupting doesn’t matter as much as you might think. While women are less likely to interrupt overall, when they do, they’re still more likely to break in on other women than they are when it comes to men.

Kieran Snyder took a more informal look at the situation, observing 15 hours of meetings with roughly equal gender representation. Snyder found that nearly two-thirds of the interruptions came from men and that those men were three times as likely to break in on women. However, women weren’t innocent. Almost 90 percent of the women who interrupted in Snyder’s analysis targeted other women.

Conversational interruptions create a cycle as people, including women, perceive female speakers as less important and interrupt them, perpetuating the idea among people of all genders that it’s acceptable. As long as the participants in a conversation believe it’s acceptable to muffle women, they do. At the same time, women learn that they need to be polite in conversations and hang back, and people socialized as women are taught to be quiet while the men are talking. The overall result is fewer female voices.

But here’s where Snyder’s analysis got particularly interesting. As she broke down the data, she found that three of the top four interruptors were women, accounting for over 30 instances per hour in the conversations where Snyder observed them in action.

The results suggest that women don’t advance in their careers beyond a certain point without learning to interrupt, at least in this male-dominated tech setting. This is really striking and starts to put directional data behind the stereotype whereby strong female leaders are often dismissed with the pejoratives bossy, unpleasant, and bitchy. As a senior woman in technology who has at times been called all of those things, I’d like to say I’m surprised. I’m not.

In other words: Women won’t advance in the business world unless they learn to manterrupt. It’s a reflection of the common social attitude that women need to behave in a more masculine way if they want to succeed professionally. Frustratingly, though, they’re also supposed to be able to turn their behavior on a dime to be more feminine when it suits a situation, an issue men don’t face in the workplace. This requires women in business situations to constantly evaluate and calibrate so they can determine which side of themselves to present, and it’s perhaps no wonder that women women develop a tendency to, for lack of a better term, womanterrupt.

Manterruption isn’t just about an inflated sense of male self-importance cultivated by sexism. It’s also about a larger social trend, also cultivated by sexism: the idea that women don’t matter and that their voices are irrelevant to conversations. It’s reinforced whenever people of any gender interrupt women, with men learning that their voices matter more while women learn that they can’t even trust other women to respect them.

When women who break in on conversations are rewarded for it with senior roles, it tightens the loop even further. Exhortations to women to be “more assertive” and “aggressive” reward those willing to be aggressive—including to other women, encouraging women to tear each other down in the workplace rather than working collaboratively.

It would appear that it’s not just men who need a little unconscious bias training.

Photo via Simon Blackley/Flickr (CC BY 2.0)