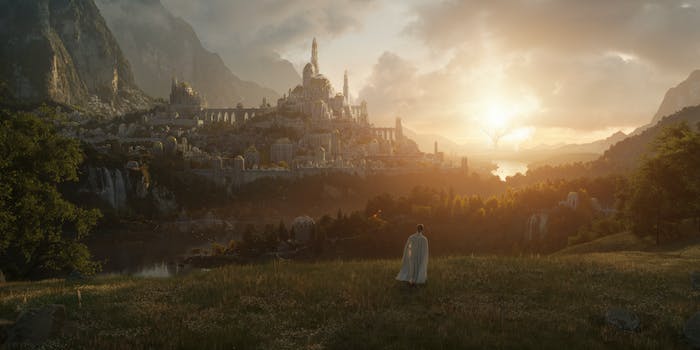 This week in streaming: Our first look at Amazon’s ‘Lord of the Rings’ series

Plus thoughts on Scarlett Johansson's Disney lawsuit and 'The Green Knight.'

If there’s one thing that feels true (even if it’s actually not), it’s that Peter Jackson’s Lord of the Rings trilogy is a formative millennial text. Debuting when many of us were fine-tuning our own tastes and preferences, it’s stood the test of time for the past 20 years and even inspired a year-long retrospective; for many of us, our love of J.R.R. Tolkien’s trilogy, a timeless pillar stone of the fantasy genre, often preceded it or followed. This meant that when Amazon first announced in 2017(!) that it was making a LOTR TV show, people had a lot of thoughts about the potential of Amazon remaking Jackson’s trilogy. Amazon eventually dispelled that notion, revealing that the show would take place during the Second Age (and thousands of years before the events of The Hobbit and LOTR).

Four years, $465 million, and several rounds of discourse around the show’s horniness potential later, production for season 1 wrapped. On Monday, Amazon revealed the premiere date and the first photo, and all of our concerns temporarily went out the window. (For a closer look at the photo, head over to the LOTR series’ official Twitter.) The photo, which TheOneRing.net confirmed is from the first episode, gave us a lot to ponder. Is the person who’s facing away from the camera a younger version of Galadriel (Morfydd Clark) or someone else? Why is that person alone? What is that city in the background? When is this supposed to take place—and where? Are those trees in the far distance the legendary Two Trees of Valinor? And if that’s the case, do those buildings make up Valinor’s main city of Valmar?

If very little of that made sense to you, you’re not alone. Much of what we know about the universe Tolkien created and its vast history comes from The Silmarillion. Spanning tens of thousands of years, it relays the creation of the universe to its many factions, depicts legends only mentioned in LOTR, takes us through the lifespans of entire civilizations such as Númenor (who the Dúnedain, of which Aragorn is one, are descended from), and the eventual rise and fall of Sauron (who was much more charismatic—and probably hot—before he became a glowing eye at the top of a tower).

Among those tales is Valinor, a region of a western continent called Aman that is often lumped into the Undying Lands—where Frodo, Bilbo, and Gandalf travel to at the end of LOTR—and has been home to the Elves. The Two Trees are in reference to Telperion (the silver tree) and Laurelin (the gold tree). Their eventual destruction by Melkor (Sauron’s old master, who also went by Morgoth) and Ungoliant would mark the end of an age, but not before their last remaining remnants of those trees would be placed in the sky to create the sun and moon. Soon enough, words like “Valinor” and “Silmarillion” trended on Twitter to the delight of LOTR fans.

We’re a long way off from the LOTR series premiering in September 2022, and right now, it still doesn’t feel quite real. But if there’s one silver lining with the 13-month heads up, it gives me—and many others, I suspect—plenty of time to dive back into The Silmarillion. It’s been way too long since I last traveled to Valinor.

Use Shopify to build your own online store

If the pandemic helped you discover that working at home is your jam, you’re not alone. The good news is that that’s a very viable thing, especially if you have an ecommerce business in mind. Building your own online store is easier than ever and Shopify can help you to get the job done. Learn how to build and customize using Liquid, the site’s templating language, in just a few hours. Now you can watch the money roll in while you eat chips in your pajamas. Living the dream, right?

Scarlett Johansson made waves last week when her legal team announced plans to sue Disney over the release of Black Widow. According to Johansson, Disney breached her contract by releasing Black Widow on Disney+, leading the actress to lose out on box office bonuses. Under normal circumstances, she might have expected a $50 million payout—and Johansson’s lawyers say that Disney refused to renegotiate when she raised concerns about releasing the film online.

Disney soon fired back with a statement saying Johansson’s demands showed a “callous disregard” for the impact of the COVID-19 pandemic, a comment that attracted accusations of hypocrisy given that Disney opened its theme parks mid-pandemic. The studio also pointed out that Johansson had already been paid $20 million for Black Widow, resulting in harsh criticism from the chairman of Johansson’s talent agency: “The company included her salary in their press statement in an attempt to weaponize her success as an artist and businesswoman.” (For context, Robert Downey Jr. picked up $10 million for his brief supporting role in Spider-Man: Homecoming.) —Gavia Baker-Whitelaw, staff writer

The Green Knight is a strange and masterful adaptation

The Green Knight isn’t afraid to get weird. Sure, it might seem like a trite thing to say when you’re talking about a film adapted from a more-than-600-year-old poem that involves an eldritch creature that would feel right at home with The Lord of the Rings’ Ents, a talking fox, spirits, giants, and visions that may or may not be real, but adaptations of Arthurian legends tend to come with a decent amount of baggage. There’s far less swordsmanship in The Green Knight than you’d expect: The most we see of an epic battle on-screen is its aftermath, an eerily quiet field laden with corpses waiting to decompose.

But despite the lack of swordplay, David Lowery’s masterful adaptation flourishes. Often fluttering between reality and a dreamlike existence and embracing the mystical elements of its source material, The Green Knight revels in its own ambiguity. With a fantastic performance from Dev Patel at its helm and visuals that pop on the screen, The Green Knight more than steps up to the mantle it sets up for itself. —M.J.

Now Playing: “She’s a Rainbow” by The Rolling Stones