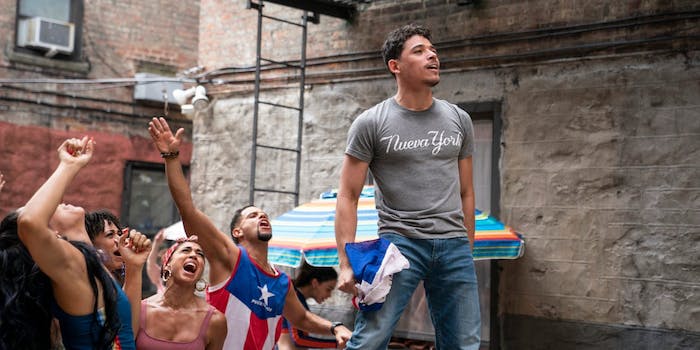 This week in streaming: ‘In The Heights’ kicks off Hot Musical Summer

Plus a spoiler-free review of 'Loki' and behind-the-scenes drama around 'Kim's Convenience.'

In The Heights kicks off Hot Musical Summer

For the past few months, I’ve been having a mini-debate with myself: When I was finally vaccinated and it’s safe, what’s the first movie I’d watch in a theater? Now that theatrical releases are starting to pick back up, the possibilities are endless, even with hybrid releases becoming more normalized. But it didn’t take long for me to settle on my first post-vaccine movie: In The Heights, Jon M. Chu’s adaptation of Lin-Manuel Miranda’s first musical.

Earlier this week, Warner Bros. posted the first eight minutes of the film on YouTube, which mostly consists of the musical’s opening number, “In The Heights.” I’m mostly going into the film cold, not being all that familiar with the musical itself apart from that particular song. But it already contained so many of the markers that made musicals—and movie musicals at that—so much fun: A sprawling ensemble cast belting their hearts out with big and splashy dance moves. It made me a bit emotional watching it on a laptop, and I can only imagine what it’d be like seeing it on the big screen. (Because of Warner Bros.’ hybrid releases for 2021, I have the opportunity to see it both ways.)

We’re no stranger to the movie musical. For so many of us, it’s one of the few ways we’ll ever get to see the splendor of a Broadway musical for ourselves; it’s often too cost-prohibitive for most of us to get in the door. Broadway isn’t dead, but short of filmed productions like Hamilton and David Byrne’s American Utopia, it’s been a long wait for the return of musicals.

In The Heights, which debuts in theaters and on HBO Max on June 10, is far from the only movie musical we’re getting this year. Annette, an original musical with music from Sparks, is opening Cannes before its release on Amazon Prime in August. The film adaptation of Dear Evan Hansen starring Ben Platt is coming in September. Steven Spielberg’s remake of West Side Story will arrive in December. And Miranda’s directorial debut, an adaptation of Tick, Tick…Boom!, is coming later this year.

Here’s everything you need to know about CBD

Depending on the type of CBD you’re using as well as how you’re consuming it, it can cause a false positive on routine drug tests. Read our guide to CBD to learn how you can avoid failing a drug test while still benefiting from the power of this mighty cannabinoid.

Marvel’s ‘Loki’ is a showcase for Tom Hiddleston

In a franchise full of mediocre villains, Tom Hiddleston’s Loki remains a standout star. Entertaining? Undoubtedly. Stylish? Absolutely. Sympathetic and misunderstood? Sometimes, until he reveals his true nature as a duplicitous little snake. Selfish, deceitful, and often played for laughs, he’s an incredibly versatile character. Hiddleston’s deep, purring voice and Shakespearean training also do wonders for Loki’s melodramatic speeches, flourishing in this new Disney+ miniseries. The rest of the show, however, is less impressive. Like The Falcon and the Winter Soldier, Loki takes far too long to get started.

Spearheaded by screenwriter Michael Waldron (Rick and Morty), Loki begins with our title character getting arrested by the TVA (Time Variance Authority), a secret organization of time cops. Governed by enigmatic gods known as the Time-Keepers, the TVA eliminates any “variants” that break away from the “sacred timeline”—an allegory, perhaps, for keeping Marvel canon on the straight and narrow. After fleeing the Avengers with the Tesseract in hand, this version of Loki became a variant that should be erased. But one TVA agent (Mobius, played by Owen Wilson) suggests another option: Loki might be useful as a kind of expert consultant.

Actor Simu Liu—soon to star in Marvel‘s Shang-Chi—raised several criticisms in a now-deleted Facebook post, alleging (among other things) that Kim’s Convenience’s Asian-Canadian cast was underpaid, and that the writer’s room “lacked both East Asian and female representation.” His co-star Jean Yoon also spoke out in a series of tweets on Sunday, describing some of season five’s initial storylines as “overtly racist,” and stating that the lack of Korean writers made her experience on the show “very difficult” and “painful.” Premiering in 2016, Kim’s Convenience focuses on a Korean Canadian family that runs a convenience store in Toronto. It’s currently streaming on Netflix. —G.B.W.

Thanks to the pandemic, I’ve finally managed to get around to some of my streaming white whales. And The Sopranos—widely considered to be one of the best TV dramas of all time—is on that list. I’m only at the beginning of season 2, so I’m a long way from determining just how true that assessment is, but I’m enthralled. I know very little about what happens apart from the ending (how could you not?), so for now, I’m going along for the ride while wracking my brain about just how Silvio Dante and the E-Street Band exist in the same universe. —M.J.

Now Playing: “Welcome to the Internet” by Bo Burnham