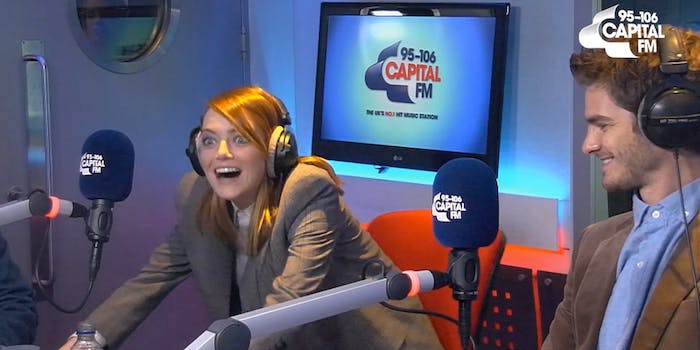 Just imagine how she'll react if she meets the other three.

The Spice Girls are hijacking Emma Stone’s promotional tour for The Amazing Spider-Man 2—and that’s completely fine with her.

Coming fresh off her previous encounter with Mel B, Stone and costar Andrew Garfield were on Capital FM when the hosts gave her another surprise. It was one thing to have a sing-off on one of the girl group’s biggest hits, but another thing entirely to FaceTime with Sporty Spice herself, Mel C.

And already knowing her favorite Spice Girl, Mel C. offers her an even bigger treat.

With less than a month until the movie is released, there’s still plenty of time for virtual meetings with the rest of the Spice Girls. Besides, this is probably the closest to another reunion we’re gonna get.