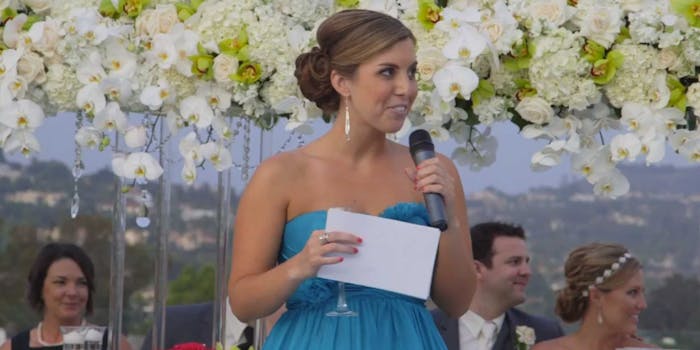 This looks like a job for little sister of the bride—and Slim Shady impersonator extraordinaire—Jennifer Gabrielli.

We’ve seen plenty of over-the-top proposals before, but this toast just might take the wedding cake.

Nicole and Blake’s wedding reception began as a relaxed affair with food, plenty of drinks, and toasts from those within the wedding party. But Jennifer Gabrielli, the younger sister of the bride, decided to take things in a different direction.

She started out normally enough with an introduction, but Ek Media Productions, who posted the video on YouTube, fast-forwarded through most of her speech.

However, Gabrielli likes to sing, and instead of a song, she prepared what she called a “musical snack” for the reception. The first few notes sounded like the beginning of a cheesy song, but it quickly switched into Eminem’s “Without Me.” She even dressed for the part by adding a hoodie to her bridesmaid dress and promised the audience there would be a lot of toasting.

While Jennifer covered all the different aspects of marriage with new lyrics, Nicole and Blake (along with the rest of the crowd) started dancing in their seats with glasses in tow.

Even before Gabrielli finished the song, she knew she had performed something worth celebrating.

“And though I’m not the first to congratulate you, I have the best toast,” she said towards the end.

If she had added a mic drop after that line, it would have been totally justified.