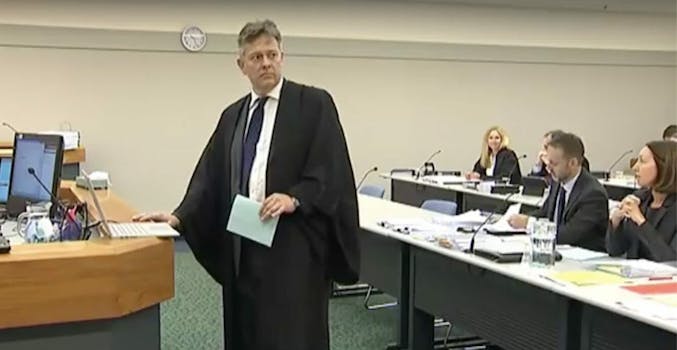 Snap back to reality.

Eminem is currently suing New Zealand’s National Party over a 2014 campaign ad that featured a beat reminiscent of his hit “Lose Yourself.” This is tremendous news for the internet, because it means there is now a video of an attorney entering the song into the official record by playing the song from a laptop as everyone in the courtroom sits, silent and unmoving, for the duration. So much for “the whole crowd goes so loud.”

It is frankly incredible how little the lawyer moves during the minute-and-a-half clip of Eminem’s bangingest banger. If the gentlemen in the front row hadn’t turned, you’d think the video had frozen. This is perhaps the most seriously anyone has ever taken the song that gave us “vomit on his sweater already, mom’s spaghetti.”

Vice’s Noisey blog declared this video “a masterpiece” that should be in the Tate Modern, and it’s hard to argue with that.

The trial came about after Eminem’s licensing people discovered the sound-alike track, which was cleverly titled “Eminem-esque.” In a National Party email released during the trial, one party member asks, “If everyone thinks it’s Eminem, and it’s listed as ‘Eminem-esque,’ how can we be confident that Eminem doesn’t say we’re ripping him off?”

They could not be confident of that at all, and now there is a lawsuit.

According to Rolling Stone, the trial is expected to last one week. Along with the awkward listening party seen above, the court was also treated to a live performance of the “Lose Yourself” riff by producer and co-writer Jeff Bass.