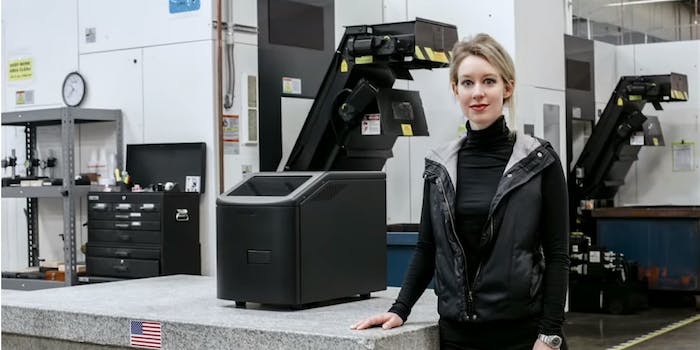 [Elizabeth Holmes voice] Did I do that?

The Inventor: Out for Blood in Silicon Valley, HBO’s new documentary on former Theranos CEO Elizabeth Holmes, debuted last night. There are a lot of head-scratchers in the Alex Gibney-helmed film—footage of Holmes and colleagues dancing rigidly to “U Can’t Touch This,” Bitcoin tie guy—and a lot of haunting closeups of Holmes’ blank face. But one thing that’s not addressed is her voice.

There’s long been a fascination with Holmes’ voice, and whether’s it’s real or just part of her scam. If one thing is clear from the doc, it’s that she got powerful men to trust her pitch for a new blood-testing technology without any real applicable science or proof that it worked. Did the voice do the heavy lifting? Was she really using “stupid man” voice? Was it more of a voice/unblinking eye combo?

Thankfully, Twitter is on it. The Holmes impressions came quick:

here’s some footage they left out of the inventor HBO doc about how Elizabeth Holmes adopted her now-infamous proven-fake voice pic.twitter.com/l8nPhhYCoP

Others pointed out that she sounds a bit like Romy in Romy and Michele’s High School Reunion:

Everyone in this Elizabeth Holmes documentary wondering where her fake baritone voice came from… Oh I know exactly where she got the idea. pic.twitter.com/eHmGqbqsYn

Others had deeper observations about how we police women’s voices:

Elizabeth Holmes is a scammer and a jerk but all the talk about her voice being “fake” and the jokes about it *really* rub me the wrong way. I get comments/emails every time I’m on the radio telling me I need to change my voice or no one will take me seriously.

[Elizabeth Holmes voice] “Onnnnce there was this girrrrl who, wouldn’t go and change with the girrrrls in the change room …”

Raise your hand if you’ve definitely tried out the Elizabeth Holmes voice in the mirror.