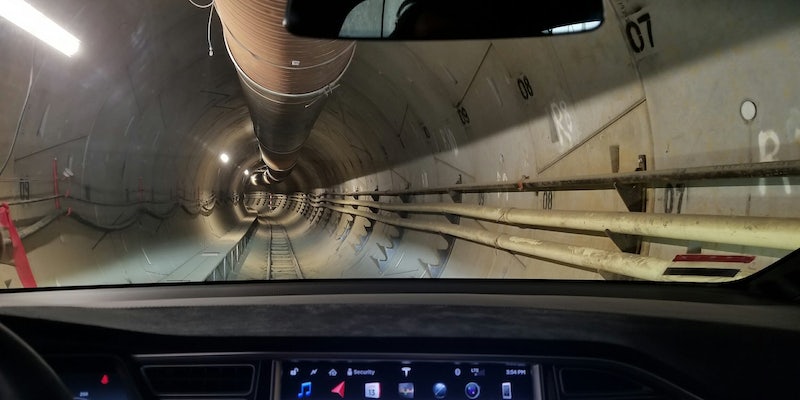 Don't worry, Musk has plenty of other tunnels on the way.

Bad news for Elon Musk and his dystopia-sounding Boring Company. Los Angeles’ Westside won’t be getting an underground tunnel after all.

The Boring Company originally planned to build the 2.7 mile-long Sepulveda tunnel, which would follow the 405 freeway and run from Sepulveda Boulevard to Washington Boulevard in Culver City. On Tuesday, the Boring Company announced the tunnel project would be scrapped after the company reached a settlement with various community organizations concerned with the project’s absent environmental review.

Musk originally introduced the idea because he despised his commute across the city’s 405 freeway, according to NBC. It didn’t take long for Twitter to dunk on the Boring Company founder. After all, he can’t just build a tunnel wherever he feels like to make his life a little easier.

So Musk got mad that he wasn't allowed to skip over necessary environmental impact surveys and bailed? Dear Lord that guy thinks of the entire world as a playground and when people try to tell him that's not the case he just picks up his toys and leaves.

— misfit from the island of moon likers (@moonautomaton) November 28, 2018

Wow @elonmusk , can you ever see things through? This was much needed. I pray you don’t drop the ball for the hyperloop. Smh.

And that's how you change the world working 100 hours/week… https://t.co/DxdhLOT9wF

Critics argue that Musk’s idea made no sense and posed real dangers to boot.

Kudos to @dennisjromero for not drinking the Kool Aid and extolling Musk prematurely for his supposed brilliance. Musk is the classic rich guy always looking to go to the front of the line w/o waiting like the rest of us… https://t.co/De2Ij8dkIJ

Along that corridor he would have to levitate everything from the ground .. it's earthquake prone and sits right on top of the biggest fault line in California. Smart move .. think maglev if anything there. 0,o https://t.co/lOL1uzSnOJ

Thank god making the heavy traffic freeway with heavy cars on it unsafe with a hallowed our tunnel underneath we have earthquakes ….

Don’t worry, Musk has enough stans to make sure his feelings aren’t hurt over the shutdown.

Of course, this isn’t the end for Elon Musk’s tunnel-building dreams. His Hawthorne test tunnel is set to give out free rides next month. He also plans to ferry along passengers to Dodgers Stadium with his Dugout Loop, which would run under Vin Scully Avenue and Sunset Boulevard. But for L.A. residents that want to sidestep the 405, Musk’s pipe dream is already a thing of the past.