Part III of one man's journey from a young, hopeful evangelical who went "courting" on the weekends to a disillusioned serial online dater.

After the move to Minneapolis, my luck improved. I went straight online for love and right away I met a recently graduated, charmingly freckled part-time music writer who painted and worked at a coffee shop. I also met a woman in her mid 30s with a job in advertising whose claim to fame was that she once worked at the same place in Portland as Carrie Brownstein. Both women were wonderful, but neither of them were The One. I suppose one could go down the list here on why, but it seems fruitless—either woman could do the same for me. Who knows, in the end. Even as I write this, I have hard time coming up with a decent reason as to why we stopped seeing each other. ,

It was the next experience that was to start my descent into the disillusionment of online dating. This first introduction to the reality of the genre—the one that highlighted what a uniquely dreadful experience it can be—came with the third woman I met in Minneapolis.

This someone, Miss X, charmed the pants—quite literally—right off of me. That’s not an alias to protect her identity. The truth is, I can’t remember her name, but don’t judge me: I assure you she does not remember mine. She messaged me first, telling me how surprised she was to see a guy like me on the site, “so intelligent and attractive,” etc. We messaged and flirted, but didn’t get each other numbers and didn’t arrange anything. That is, until one night after work when I found her online, around midnight. We again chatted. She was sexy and smart and I was as charming as I possibly could be. Things were great. 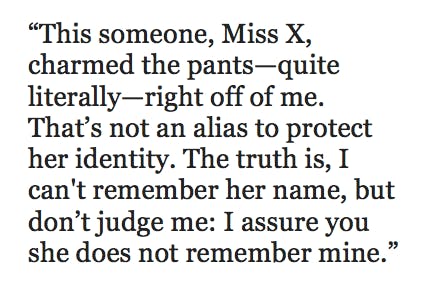 Let me back up a moment. This woman, a part-time student and waitress at a bohemian pizza place, did not list “Casual Sex” as one of the things she was looking for on her profile. “Long Term Dating,” “Short Term Dating,” “Friends,” and “Activity Partners,” yes—just not casual sex. I would’ve noticed if she had because you never see “Casual Sex” as a want. If you do, it’s usually associated with someone you should avoid. And while that association may change someday, for now, it’s how it is.

So I’m chatting with the woman who, a week before, had told me I was intelligent and attractive and, for her part, seemed very much the same.  Dusky blonde hair, pale, tattooed, the whole thing. Now, I’ll spare you most of cringe-worthy details of our conversation; suffice it to say, by the end of our conversation she told me she’d be coming over to my place in the suburbs so I could read to her from one of my favorite novels. The time, I noticed as we signed off, was 3am.

I had no idea what was happening, but I figured I’d just go with it. I took her at face value, like the sincere young man I was, somewhere deep down inside. So when she came over I welcomed her in and we went upstairs and I, well, read to her. Just like we had planned. Then, as if a pimp had in fact arranged the entire meeting, we went to bed. Oh, this is sweet, is what I thought. We’d gotten along so well. She’d commended me on how well I read, even asked me how much I liked her ass—see how far I had already come from the evangelical farm boy. Apparently, not far enough. Of course we’d see each other soon. Two people don’t just read to each other, jump into bed, and never see one another again. We hadn’t met at a brothel.

Whatever she was thinking, whatever I was thinking, neither of us said it as she left in the morning. We kissed goodbye without even saying the word “goodbye.” Still, I knew it wouldn’t be long until I saw her. So the next day I texted to ask what she was up to that afternoon. I waited several hours, then I got her response. 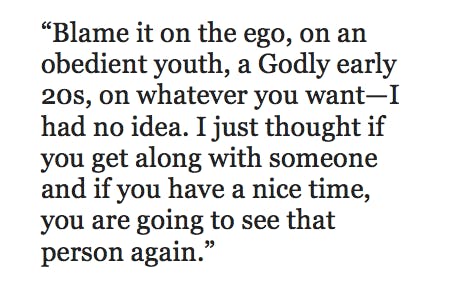 Okay, I thought, and wrote back asking how it was going with the studying and if she might want to hang out later in the week. I didn’t hear another word.

Because no God had held us back, I knew she didn’t feel ‘sinful’ for what we’d done. So I called, I sent a text, then, after another couple days of nothing, I finally understood what she was trying to tell me. I’d like to say I didn’t write her again; I did. I wrote her a message asking her to tell me why. My now-much experienced self can imagine how pathetic she must have thought I was, the fact that I would plead with her to tell me, not understanding what we were doing or why it had happened.

I’m here to unabashedly tell you, I really didn’t. Blame it on the ego, on an obedient youth, a Godly early 20s, on whatever you want—I had no idea. I just thought if you get along with someone and if you have a nice time, you are going to see that person again.

“Studying,” I look back at that message and realize it served as my warning. It’s almost funny, considering how massively I’ve failed at online dating, how brazenly unheeded some warnings can be.