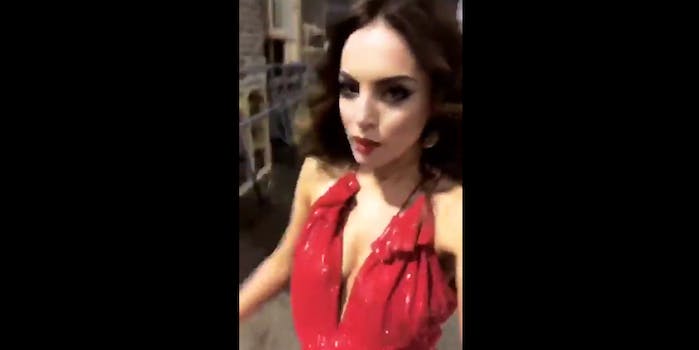 This actor’s dramatic video is now a Twitter meme

Elizabeth Gillies' walking blew up the internet, and it is hyper-relatable.

Elizabeth Gillies turned heads with a video she posted on Sept. 28, which shows her strutting her stuff in an elegant red dress. The video quickly became a meme, with people flocking to add their own captions to the video of her confident swagger through the set of the Dynasty reboot, in which she stars as Fallon Carrington.

You’ve probably seen variations of this clip in your feed lately:

Within days people were sharing the video with their own captions, like this one claiming Gillies “invented walking.”

me after doing one (1) squat and showing off my new and improved body https://t.co/deGFA82yVB

Twitter user @sarahfneil1 gave a shoutout to all the theater geeks out there with her caption, “theater kids walking into a Denny’s after their closing show.” Gillies herself even retweeted that one.

theater kids walking into a denny’s after their closing show https://t.co/XLQQmXRTq7

Another relateable meme shared the video alongside a scenario everyone has experienced at least once. “Me walking past the people I just passed cause I went the wrong way,” @PTRCLVS wrote.

Me walking past the people I just passed cause I went the wrong way https://t.co/YeKLgRH6Mq

From there, dozens of people jumped on board, sharing the video with a variety of real-world scenarios captioning it. Grabbing Starbucks on the way to work, sauntering through Disneyland with that oh-so-wonderful fast pass, and even holding in vomit on the way to the bathroom were all targets.

Me, fifteen minutes late to work walking into Starbucks to pick up the cold brew I mobile ordered pic.twitter.com/4K0D7GGTIJ

Walking down the fastpass line at Disneyland with everyone in the standby gawking at you pic.twitter.com/s7VABN9GdF

going after your horse after you fall off and people are watching https://t.co/SH50ntCywb

me coming onto twitter knowing that my mutuals are tired of me and my nonsense https://t.co/hQIzqqGoiq

Next time you have something important to do, channel Gillies’ confident strut and get your way.