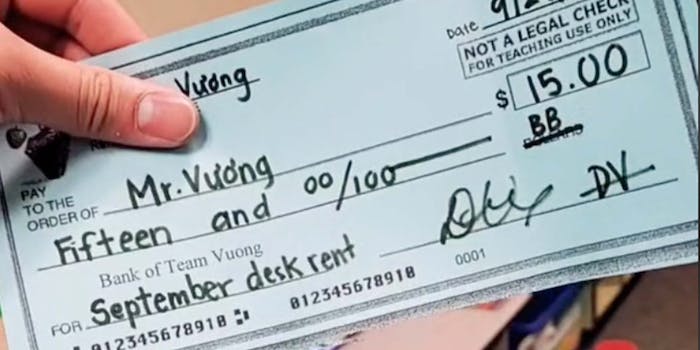 In a TikTok posted on Sept. 25, a teacher explained the token economy system that he uses in his class to teach students financial literacy and reinforce good behavior in class—and the comment section blew up.

The original TikTok from @teamvuong—who goes by Mr. Vuong—showed how students in his class can earn “brain bucks” for attendance, “being responsible,” and class participation. The TikTok got over 2 million views and 10,000 comments.

“And on the last Friday of the month? Gotta pay rent!” says Vuong in the TikTok. He charges fifteen brain bucks for monthly rent on each student’s desk. They also have the opportunity to pay seventy-five brain bucks to “pay off” their desk and be exempt from rent for the rest of the year.

“It’s really interesting to see which kids has delayed or instant gratification and see how they budget their money,” says Vuong.

Students can spend their money on prizes or purchase privileges on a simulated Amazon online shopping site, where they have to pay a tax as well.

“Wow I don’t like this at all,” commented @mrwrightiswright, another teacher who posts on TikTok. “Why would you try to replicate capitalism in the classroom? What happens if they can’t make rent?”

Others also were confused about how the system is fair to all students.

“How do sick days and minority religious holidays off play into the system?” commented @thewildamalia.

“This is also ableist,” wrote @chelxcherry. “Some kids can’t come to school everyday for many different reasons.”

Some condemned the token economy entirely.

“I hope you reconsider this practice,” commented @jamesdout. “No one can be perfect but I know [you] can be better.”

Vuong told the Daily Dot that he didn’t expect his video to get the reaction it did.

“Some feedback was very validating, some were constructive and helpful,” Vuong told the Daily Dot in an Instagram direct message. “Others were rooted in judgement and assumptions, people who haven’t seen all my videos to know where my values truly lie.”

Vuong made another video to further explain the system, and respond to many of the questions he received.

“If a child doesn’t have enough to make their rent, then I would assess why,” says Vuong. “If they don’t have enough because of a decision they made that’s within their control, it would be a really teachable moment about how to budget their money.”

Vuong also said that he would find ways for students to earn more money if they were unable to make rent.

“And no, I would not traumatize and shame kids by evicting them and taking away their desk,” said Vuong. He also clarified that if attendance was an issue for students because they were sick or something was going on at home, he would “deprioritize” the token economy system.

“Paying fake rent does not trump what’s happening in real life,” he says in the video.

When it comes to the comments he received about ableism, Vuong said he appreciated that so many people brought up how the system could perpetuate ableisn.

“You gotta call it out when you see it,” says Vuong. “So thank you for keeping me in check.”

He also said he plans to add sick days and personal time off to his system. Vuong told the Daily Dot that he appreciated the dialogue that his videos created, and that he’s not going to stop using the token economy system.

“This is inspiring me to revamp the system,” he told the Daily Dot.

Many applauded Vuong’s openness to tweak his system and take the constructive criticism he received.

“Thank you so much for being open to the opinions of those of us that dealt with chronic illness in school,” commented @georges_wild_world.

“I feel bad that you have to explain yourself but loved hearing about how much thought you put into this,” wrote @emilie_3_2_6, who identified themselves as a middle school teacher.

“Love it when people explain their decisions as well as take on criticism,” commented @yellowyeetus_.