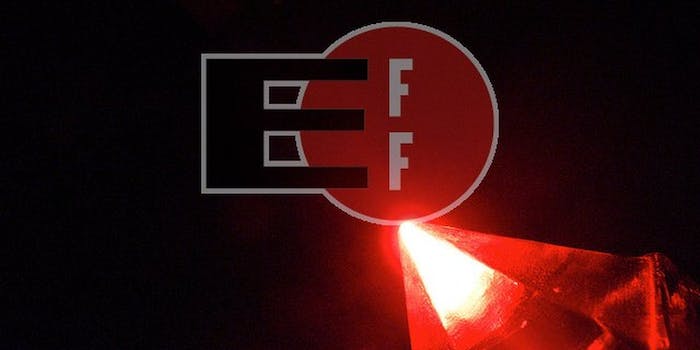 Nineteen organizations including Unitarian church groups, gun ownership advocates, and a broad coalition of membership and political advocacy organizations filed suit against the National Security Agency (NSA) today for violating their First Amendment right of association by illegally collecting their call records. The coalition is represented by the Electronic Frontier Foundation (EFF), a group with years of experience fighting illegal government surveillance in the courts.

“The First Amendment protects the freedom to associate and express political views as a group, but the NSA’s mass, untargeted collection of Americans’ phone records violates that right by giving the government a dramatically detailed picture into our associational ties,” said EFF Legal Director Cindy Cohn. “Who we call, how often we call them, and how long we speak shows the government what groups we belong to or associate with, which political issues concern us, and our religious affiliation. Exposing this information – especially in a massive, untargeted way over a long period of time – violates the Constitution and the basic First Amendment tests that have been in place for over 50 years.”

At the heart of First Unitarian Church of Los Angeles v. NSA is the bulk telephone records collection program that was confirmed by last month’s publication of an order from the Foreign Intelligence Surveillance Court (FISC). The Director of National Intelligence (DNI) further confirmed that this formerly secret document was legitimate, and part of a broader program to collect all major telecommunications customers’ call histories. The order demands wholesale collection of every call made, the location of the phone, the time of the call, the duration of the call, and other “identifying information” for every phone and call for all customers of Verizon for a period of three months. Government officials further confirmed that this was just one of series of orders issued on a rolling basis since at least 2006.

“People who hold controversial views – whether it’s about gun ownership policies, drug legalization, or immigration – often must express views as a group in order to act and advocate effectively,” said Cohn. “But fear of individual exposure when participating in political debates over high-stakes issues can dissuade people from taking part. That’s why the Supreme Court ruled in 1958 that membership lists of groups have strong First Amendment protection. Telephone records, especially complete records collected over many years, are even more invasive than membership lists, since they show casual or repeated inquiries as well as full membership.”

“The First Unitarian Church of Los Angeles has a proud history of working for justice and protecting people in jeopardy for expressing their political views,” said Rev. Rick Hoyt. “In the 1950s, we resisted the McCarthy hysteria and supported blacklisted Hollywood writers and actors, and we fought California’s ‘loyalty oaths’ all the way to the Supreme Court. And in the 1980s, we gave sanctuary to refugees from civil wars in Central America. The principles of our faith often require our church to take bold stands on controversial issues. We joined this lawsuit to stop the illegal surveillance of our members and the people we serve. Our church members and our neighbors who come to us for help should not fear that their participation in the church might have consequences for themselves or their families. This spying makes people afraid to belong to our church community.”

In addition to the First Unitarian Church of Los Angeles, the full list of plaintiffs in this case includes the Bill of Rights Defense Committee, Calguns Foundation, Greenpeace, Human Rights Watch, People for the American Way, and TechFreedom.

EFF also represents the plaintiffs in Jewel v. NSA, a class action case filed on behalf of individuals in 2008 aimed at ending the NSA’s dragnet surveillance of millions of ordinary Americans. Last week, a federal court judge rejected the U.S. government’s latest attempt to dismiss the case, allowing the allegations at the heart of the suit to move forward under the supervision of a public federal court.

This story originally appeared on the Electronic Frontier Foundation’s website, and appears here under the Creative Commons attribution license.