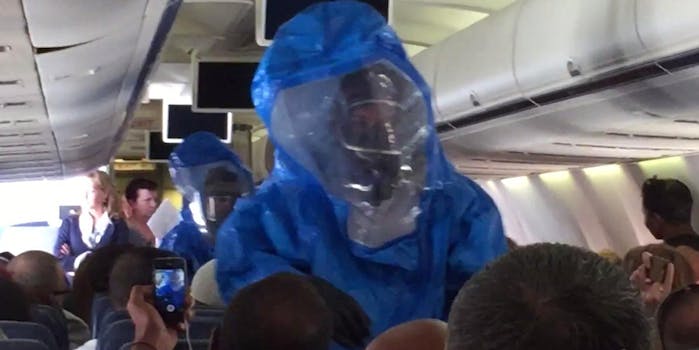 ‘I have Ebola’ joke gets man kicked off plane

With Ebola mania currently sweeping the U.S., some people aren’t taking any chances. As documented in a video posted to YouTube yesterday, US Airways flight 845 from Philadelphia to Punta Cana Airport in the Dominican Republic was held on the ground after a 54-year-old passenger allegedly sneezed and said, “I have Ebola; you’re all screwed.”

A hazmat team ushered the man off the plane and into a separate medical area while the rest of the passengers filmed it on their phones.

“I think the man who said this is an idiot,” said a flight attendant. “But I want you to keep your wits about you.”

The flight was held for around two hours before passengers were released. The man was found not to have symptoms of Ebola.

“We apologize for any inconvenience this may have caused, but the safety of our customers and crews is our main priority,” a US Airways statement read. “We don’t know why he did it, but he thought it would be a cute joke that would not be so serious. Thankfully it was only a scare.”