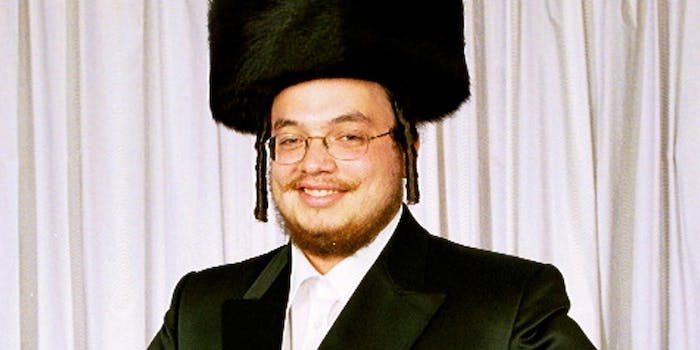 Most Orthodox Jews want to make sure they’ve got a place in the next world. Ari Mandel just wants to make sure he’s sold his.

If the Messiah comes, most Orthodox Jews want to make sure they’ve got a place in the next world. Ari Mandel just wants to make sure he’s sold his.

Yesterday, the former Orthodox Jew put his spot in Olam HaBah, the “world to come” or the world after the Jewish Messiah arrives (“heaven” is a loose and bad translation) up for auction on eBay. The bids started at 99 cents and by the afternoon had jumped to $100,000, but eBay removed the item due to rules that objects sold on eBay be “tangible.”

Haredi or ultra-Orthodox Jews live modest lives because their reward is “in the next world.” A spot there, to an ultra-Orthodox Jew, should cost more than 100,000 dollars: It costs years of strict observance and tons of good deeds.

“The narrative goes, ‘We don’t live these fancy extravagant lives or like the (non-Jews) because our reward is in the next world. Everything we do is collecting credits for the world to come,’“ Mandel said in an interview with the Jewish Daily Forward. His spot is secure, he claimed, because he won’t return to Judaism and claim it for himself, but he also won’t commit any sins that would keep the buyer out of Olam HaBah.

According to Jewish Daily Forward, eBay started receiving complaints after the post was shared on a bulletin board for ultra-Orthodox Internet users.

“There were countless people offended,” Mandel said. “People sent me screen shots of people having reported it.”

Mandel, a divorced 31-year-old from Teaneck, N.J., says the auction was a joke, a funny idea he came up with on the fly. Mandel left the faith seven years ago, joined the U.S. Army, and became a student at New York University. He’s been in the media before, having been the subject of this Arizona Jewish Post article about disenchanted Chassids joining the military.

But Mandel should have a new career as a comedy writer. The description on Mandel’s spot in Olam HaBah on eBay is some of the best Jewish satire:

“Okay sure, I went off the Derech (left the religious community). But even the worst Rasha (evil-doer) only goes to Gehenom (Hell) for twelve months, and that’s without anyone saying kaddish for them. I have seven(!) brothers, I’m sure a couple of them will outlive me and say kaddish for me. I’ve done my fair share of Aveiros (sins), but I have a decent amount of unassailable Mitzvos (good deeds) under my belt as well. I was a good student all through yeshiva, never broke any Halachos (Jewish laws) — and was even careful about Minhagim (customs) – until my early twenties. I am now about 98% vegan, so I don’t eat any real treif (anymore), and being that I’m an atheist, I don’t worship Avodah Zoroh (false idols). I have dedicated a lot of time and effort to fighting molestation in the Frum community, I served in the US Army, where I was the Jewish Lay Leader on my base in South Korea for a year, and when I was deployed to Haiti in 2010 immediately after the earthquake I saved countless lives (I realize they’re goyim, but still – they’ve gotta count for something). Plus – to this day I listen to Jewish music all the time, so that must add something. So all in all I think my Chelek (portion) in Olam Habaah (heaven) is definitely worth a pretty penny. Don’t be a cheap Jew, and fork it over like it’s Maftir Yona (the honor of blessing the Torah on Yom Kippur which gets auctioned to a congregation member for a big donation and is regarded as a sign of success in business). Remember – you’re bidding on an eternal reward in heaven!”

Does the Onion have a Jewish section? Someone give this guy a job at the Jewish Onion (the Batzal?).