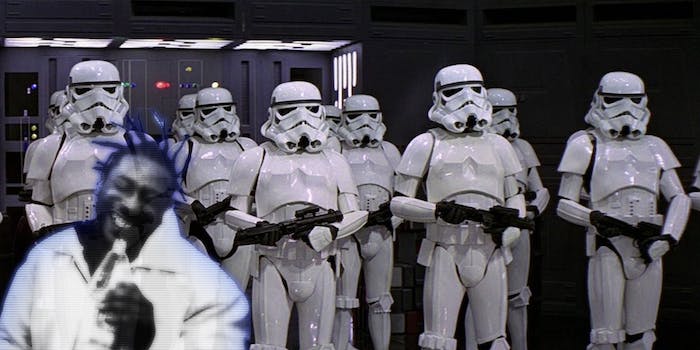 The Eazy-E and O.D.B. hologram GIFs you’ve been looking for

The late rap icons are scheduled to appear as holograms on the upcoming Rock the Bells tour.

Ol’ Dirty Bastard and Eazy-E are about to join Tupac Shakur in hologram heaven.

The late rappers will “perform” at this year’s Rock the Bells, the tour announced today.

In April 2012, Coachella patrons were stunned after Shakur took the stage to rap with former Death Row Records partner Snoop Dogg as part of an elaborate hologram production. The stunt set the Internet off in a meme-generating frenzy, as the hologram was Photoshopped into scenes from Star Wars and the Titanic, while the music industry considered it a potential gold mine for legacy artists.

A founding member of the Wu-Tang Clan, O.D.B.  died from a drug overdose in 2004. Eazy-E, best known for his work in the iconic N.W.A., passed in 1995, due to complications from AIDS. Between the two, the potential for the possible set lists is endless.

The 10-year anniversary tour of Rock the Bells kicks off in San Bernardino, Calif., on Sept. 7-8 and make stops in Mountain View, Calif., Washington, D.C., and North Rutherford, N.J., through October.

While you all anxiously wait to see O.D.B. rap about putting “the killer ants in your pants,” here are two GIFS of the deceased making their Star Wars cameos.