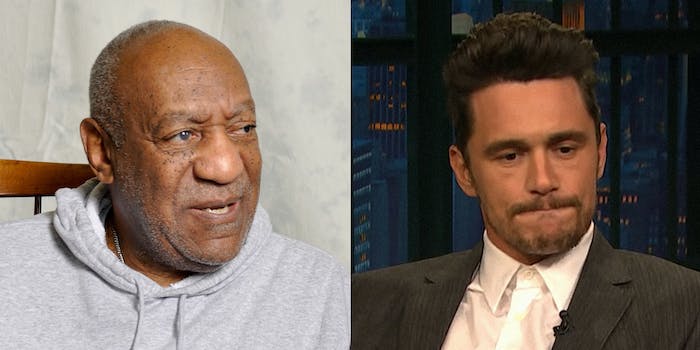 Dylan Farrow speaks out on Cosby and Franco cases: ‘Many survivors will look at the events of today and decide it’s not worth it’

She described Bill Cosby and James Franco as examples of how the justice system 'continually fails survivors of sexual assault.'

Wednesday saw major updates in two high-profile Hollywood sex abuse cases: Bill Cosby‘s sexual assault conviction being overturned, and James Franco settling a class action sexual misconduct lawsuit for $2.2 million. While these cases are unrelated, they were seen by many as overlapping examples of abusive power structures in Hollywood—and flaws in a legal system where sexual abuse survivors struggle to have their voices heard.

Dylan Farrow—who accused her father Woody Allen of sexual abuse in 1992—was among the people who spoke out against these results. In a Twitter post aimed at “Cosby, Franco, and all of the perpetrators who won’t face justice,” Farrow highlighted the fact that despite being accused of rape and sexual misconduct by 60 women, Cosby will now go free. She described this as “a perfect example of how not just our society, but our justice system, continually fails survivors of sexual assault.”

James Franco was accused of “sexually-charged behavior” by several former pupils of his private acting school, alleging that Franco pressured women to participate in on-camera sex scenes in an “orgy-type setting,” fraudulently presenting these classes as a real route into the industry.

One of his accusers, Sarah Tither-Kaplan, tweeted this on Wednesday: “Not commenting on the news that broke today. I’m very lucky to finally have a strong support system. I hope soon my focus can just be on making movies. That’s all I’ve ever wanted.” The $2.2 million settlement will be split between Franco’s accusers and their legal team.

Dylan Farrow framed the Franco and Cosby cases as a damaging message about the legal system’s response to sexual abuse. “Many survivors will look at the events of today and decide it’s not worth it; that even when justice is served, it can be taken away. Perpetrators see what has happened today and know their crimes will go unpunished.”

The Daily Dot has reached out to James Franco and Bill Cosby’s teams.