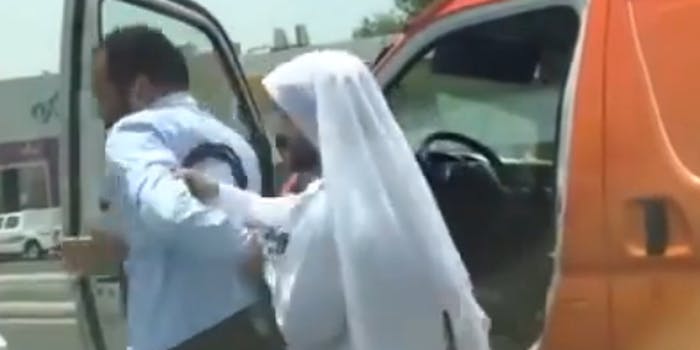 Dubai police have arrested a man who filmed an assault, because the video was posted online rather than handed privately to police.

Dubai police have arrested a man who filmed an assault, because the video was posted online rather than handed privately to police.

The clip shows what appears to be an Emirati man attacking an Indian expatriate van driver with his igal (headband) earlier this week, seemingly after a road accident. Police became aware of the video only when the son of the man accused of the attack saw it on YouTube.

The son claimed the clip harmed his father’s reputation, according to France24, since it had garnered hundreds of thousands of views. However, police stepped in to arrest the apparent attacker.

You might think that would more or less settle the case, but Dubai police wrote on Twitter they actually arrested the man who shot the video, as well—for defamation.

There’s an important distinction here that the police claimed to have arrested the man who shot the video, rather than the individual who posted it to YouTube. In the video of the attack, the watermark for another video-sharing service, LiveLeak, is visible, indicating it was posted there first and later redistributed on YouTube.

Police later clarified the decision to arrest the cameraman, who was apparently simply driving by as the incident occurred. Even if he had taken measures to block out the faces of the men in the video and the logo on the side of the van, he still would have been arrested for sharing the video without the attacker and victim’s permission.

@mobliin If a crime was video recorded, the person should contacted the police and provided them the evidence ..cont.

@mobliin not sharing it through social network.