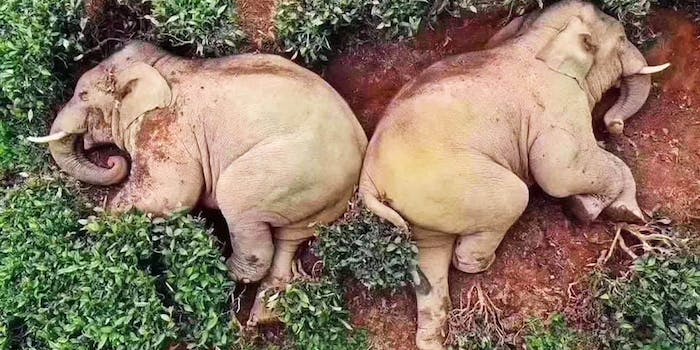 No, a bunch of elephants didn’t get drunk and fall asleep in a tea garden

As the world continues to wait out a global pandemic, people quarantined in their homes are looking for any distractions. This may be why, earlier this week, when a story surfaced that claimed a group of elephants looking for food broke into a village in China and accidentally got drunk and passed out—in the most adorable fashion possible, natch—many were quick to believe it at face value. Drunk elephants! Who would’ve thought? Not us!

An employee for the UK’s National Health Service tweeted out the claim on Wednesday. “While humans carry out social distancing, a group of 14 elephants broke into a village in Yunan province, looking for corn and other food,” he wrote. “They ended up drinking 30kg of corn wine and got so drunk that they fell asleep in a nearby tea garden.”

The images quickly went viral, and the tweet has accumulated nearly one million likes in two days. UK news outlets such as The Mirror likewise covered the story, cheekily writing that the drunk elephants were subsequently “somewhat the worse for wear” and that there must have been “some sore heads” the following morning.

Others likewise shared and commented, because who doesn’t love some themselves some drunk elephants?

Unfortunately, we regret to inform you that the account is simply not true.

Alyx Gorman, the lifestyle editor for Guardian Australia, weighed in on Thursday to debunk the story. “It makes me very sad that this story about drunken elephants raiding a wine store is definitely not true,” tweeted Gorman. When another journalist pointed out a 2010 Guardian piece about drunk elephants going on a deadly, four-day rampage in India, Gorman added that a quick Google investigation had debunked this drunk elephant story.

A few others—including Guardian writer Hannah Jane Parkinson and Bloomberg comms person Erin McPike—came forward with receipts in the form of a 2005 National Geographic article. In yet another drunk elephant myth, the piece debunked claims that unwitting pachyderms could get hammered simply by eating fermenting fruit from the ground.

Another user was even able to trace the provenance of the photos to a Yunnan Sourcing Tea Shop newsletter, and attested that the elephants were definitely not drunk.

The late University of Bristol biologist Steve Morris told National Geographic in 2005 that anecdotes of elephants found drunk in the wild apparently date back to more than a century.

“There are travelers’ tales from about 1839 reporting Zulu accounts that ‘elephants gently warm their brains with fermented fruits,'” Morris said at the time, adding that there is “nothing in the biology of either the African elephant or the marula fruit” to support such theories.

“People just want to believe in drunken elephants,” Morris concluded. And clearly, do they ever!

So while elephants, on very rare occasions, can get a little drunk (as a treat!), it’s also highly improbable and most definitely the exception to the rule. Sorry, everyone, you may now resume your boring, non-drunk elephant quarantine.