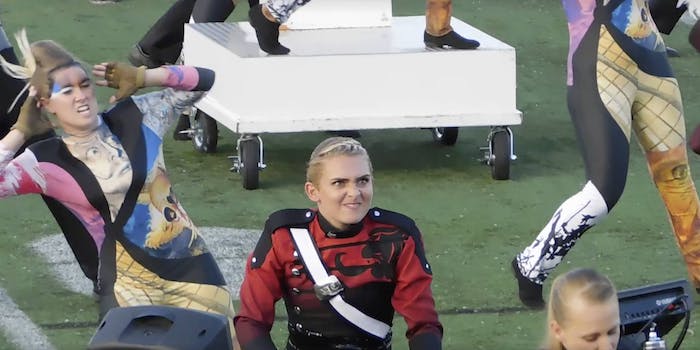 Don Quixote would be proud.

If you thought the summer months were for lounging around and contemplating the inevitable heat death of this planet, you’re wrong. The hot and heavy season is proving ground for aspiring musicians everywhere who’ve entered into the non-stop thrill ride known as drum corps.

One of the most illustrious, storied drum corps groups, the Boston Crusaders, has yet another tale up its sweat-soaked sleeves. The group has been performing a work called Quixotic, which turns the plight of Don Quixote into something straight out of a band-camp nightmare.

And it is! This video, featuring metal-as-fuck keyboardist Anna Eberhart, comes straight from the climactic moment at which Don Quixote loses his ever-loving mind. The visuals are meant to be batshit, and Eberhart takes that insanity-inducing role quite seriously, as you can see.

“I thought that was so funny,” Eberhart said after her facial contortions went viral. “We started calling ourselves the possibly possessed pit.”

Major props to Eberhart, a musician who’s not only talented enough to make it to the Boston Crusaders but bold enough to work it behind a synth—truly the least mobile instrument ever allowed into a marching band.