Is it time to #DropThePlus?

When it comes to the myriad terminology out there meant to serve as descriptors for fuller-figured women, “plus-size” has come under scrutiny more than once. And now Australian model Stefania Ferrario’s #DropThePlus campaign, spearheaded in partnership with actress and author Ajay Rochester, is fighting to ban it altogether.

As a strident supporter of movements in size acceptance, body positivity, and fat positivity, the term plus-size has always seemed more accessible to me than “curvy,” when you consider that curvaceousness isn’t exclusive to women above a certain size, and not nearly as antiquated as “husky.” I’ve been happy to use the label in my work, purposefully identifying myself as a “plus-size woman” along the way.

That being said, however, I understand people’s qualms with the identifier and would certainly be willing to hop on board a “no labels required” ideology. In theory, anyway.

In her Instagram callout for the #DropThePlus campaign, Ferrario expresses a total “disempowerment” as the result of being deemed “plus” within the modeling industry for being above a size 4. She believes it’s “‘harmful’ to call a model ‘plus’ and damaging for the minds of young girls.”

On paper, this all sounds logical and important. Girls are exposed to impossible standards of beauty from the moment they’re old enough to vocalize the word “beauty” and there’s no doubt that intentionally placed aspirational imagery in line with the “thin is the only beautiful” mantra is devastating and harmful to all people. When looking at a photo of Ferrario, it’s quite easy to see that she’s not actually “plus-size” by the majority of people’s perceptions. She is a strikingly beautiful woman with stunning curves, but she is also slender.

I am a model FULL STOP. Unfortunately in the modelling industry if you're above a US size 4 you are considered plus size, and so I'm often labelled a 'plus size' model. I do NOT find this empowering. A couple of days ago, @ajayrochester called the industry to task for its use of the term 'plus size' by making the point that it is 'harmful' to call a model 'plus' and damaging for the minds of young girls. I fully support Ajay and agree with her. Let's have models of ALL shapes, sizes and ethnicities, and drop the misleading labels. I'm NOT proud to be called 'plus', but I AM proud to be called a 'model', that is my profession! Visit droptheplus.org for full explanation of the dangers this label carries (especially on young impressionable girls). #droptheplus

I think most of us can agree with Ferrario up until this point: She’s not plus-size, so it makes sense for her not to feel empowered by the label. But what about all the women who do find it empowering? What about the many women who take inspiration from plus-size bloggers and spokespeople who have adopted the term lovingly—with actual pride after being told for so long that their bodies were flawed and unworthy? Whilst Ferrario means well—something transparent and essentially redeemable—her seeming abhorrence with the term inadvertently suggests that there’s a problem with being plus-size.

When Ferrario writes, “Let’s have models of all shapes, sizes and ethnicities, and drop the misleading labels,” anyone whose ultimate goal is size-inclusivity probably wants to rejoice at the words. After all, the dream is for there not to be labels. For all stores to sell all sizes; for acceptance to be a given, regardless of weight.

But when she ends her monologue with, “I’m not proud to be called ‘plus,’ but I am proud to be called a ‘model,’ that is my profession,” I can’t help but feel invalidated. Is it so wrong to be called “plus” if it’s a term you yourself have chosen to adopt? So many people have fought and cried and strived for plus-size visibility, to instill plus-size pride, and honestly, that isn’t something that should be taken away from them. 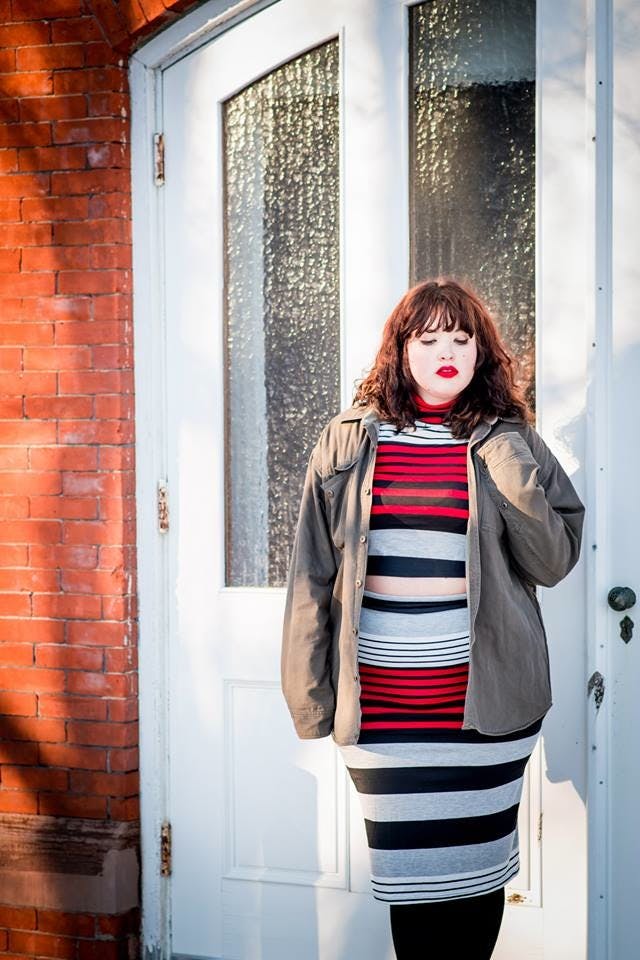 Before I was exposed to the world of “plus-size fashion,” I never would have felt comfortable enough to wear the outfit you see above. Not wearing horizontal stripes as a plus-size woman is a basic and enforced rule, and I would’ve been terrified to touch such a pattern. Add to that the cropped nature of the top that reveals a bit of belly, and I would’ve quite literally run away from the whole ensemble. It’s largely been because of efforts in size acceptance that I grew to love my belly and that I learned to wear the clothes I wanted to wear—no matter how “rule breaking” they might be—and see the beauty in every roll or bit of cellulite or in the wideness of my hips.

Though I can grasp why the term “plus-size” is problematic—it can imply that women of a certain size are “larger than they should be”—I fully believe that plus-size women have taken it back (not unlike our efforts to reclaim the word “fat” in positive and empowering contexts). And I certainly see the danger in labeling a size 4 model “plus” as well. But for every model unhappy with being identified as “plus,” I’m willing to believe there are a dozen women (models included) who find beauty, pride and a sense of identity in the same words.

The simple, albeit grim, truth is that we are nowhere near a point where these labels can be thrown away. Until children are taught from Day 1 that it’s OK to be different, until the fat kid in school isn’t at obvious risk of bullying, and until the plus-size woman in a string bikini can walk down the beach without being gawked at, we aren’t ready to abandon the terminology. It’s still useful. It’s still empowering. It’s still important.

Someday I hope we won’t need it. But I don’t think we’ll get there unless we first show pride and love for our plus-size bodies.

Photo via xshamethestrongx/Flickr (CC BY 2.0)