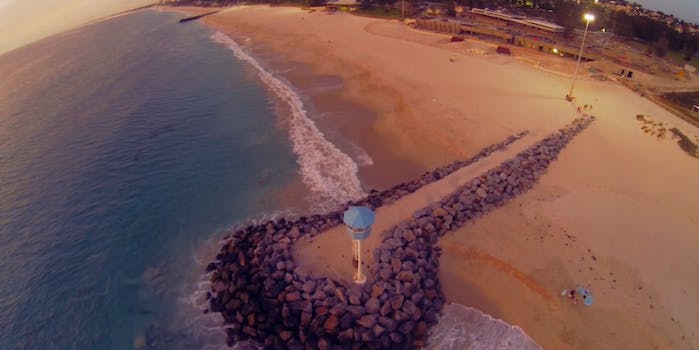 If it weren't for his quick thinking, we'd never have this video to enjoy.

A drone enthusiast filming a serene view of a coastline almost saw the ocean swallow up his battery-powered craft.

Ryan Chatfield was flying his DJI Phantom 2 drone at Floreat Beach in Western Australia, capturing breathtaking footage of a small pier and a lighthouse that jut out into the Indian Ocean. But then the device unexpectedly began to drift back down from the skies—its battery was running low.

Chatfield had to jump into action to snatch his drone before the ocean could do it first.

You don’t have to be a composer to know that the sweet sounds of Nicolas Francoual’s dubstep version of Enya’s “Sail Away” fit this rescue perfectly.

While Chatfield’s rescue mission is certainly something to see from the drone’s perspective, his feat is far from unique. In September 2014, a drone owner had to save his device before it plummeted into the Green Lake in British Columbia. And in January 2015, Zwier Spanjer saved his drone from a similar fate when it began drifting toward a pond.