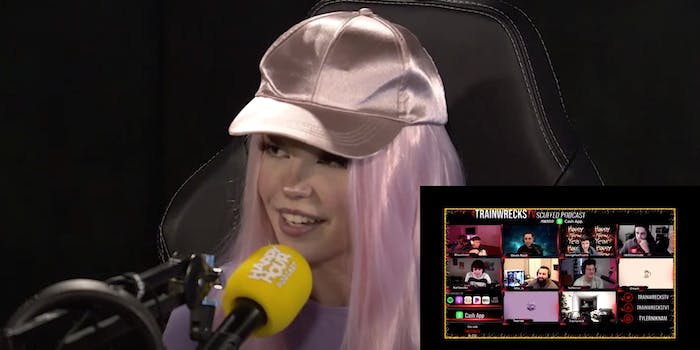 Mary-Belle Kirschner, who goes by Belle Delphine online, is an adult content creator based in the United Kingdom who previously went viral for selling her bathwater to fans. She apparently has a new viewer in Dream, who told his fans that he and a few friends watched her latest video. Now, said fans are freaking out.

Dream, who has grown widely popular on YouTube for playing Minecraft, watched Delphine’s video with fellow streamers Sapnap and GeorgeNotFound.

“It was very weird, but we were just curious,” Dream said. “So we were just watching it, not in a weird way.”

“nsfw // so you’re telling me…. dream subscribed to belle delphine’s onlyfans in order to watch it WITH sapnap and george, ALL WHILE HIS MOTHERS FRIEND IS AT HIS HOUSE, FULLSCREEN ON TWO MONITORS, FULL VOLUME. WATCHING WITH BOTH SAPNAP AND GEORGE. GOOD FUCKING NIGHT,” one account tweeted.

Delphine told the Happy Hour Podcast in November that she was creating an adult video. The video was to be uploading on New Year’s.

Now, Delphine is trending on Twitter from other reactions too. And most people did not want to start out 2021 this way.

“The Twitter guy having to start off 2021 by writing a description for ‘Belle Delphine’,” one account tweeted.

“Gonna tell my kids this was Belle Delphine,” another tweeted.

“so i wake up to the dream team talking about belle delphine’s onlyfans,” another account posted.

“Just seen the Belle Delphine video,” someone else posted.

“belle delphine is trending because dream george and sapnap did WHAT now,” another said.

Delphine has been attributed to the e-girl trend, which is a Gen Z internet-based subculture popular on TikTok and YouTube.