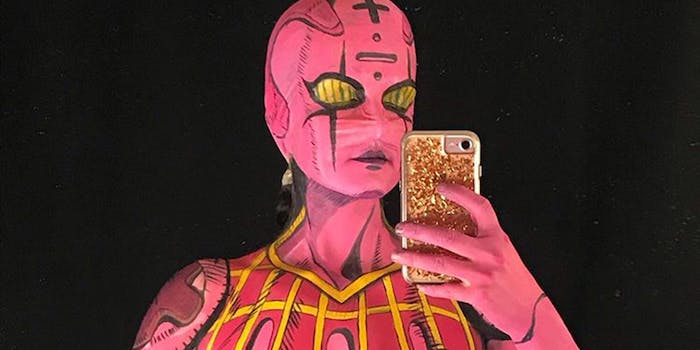 Twitch streamer says she was banned for body painting

'My channel has been wrongfully taken from me.'

Fans are signing a petition for Twitch to reinstate Taylor, a body painter who goes by the username forkgirl, after she was banned during a live stream.

The streamer was in the middle of painting her body when her account was indefinitely banned mid-stream. Taylor, who asked to be identified only by her first name, said her channel was shut down, and she received an automated email stating, “Your Twitch account has been indefinitely suspended, which was for ‘creating or sharing content featuring nudity.'”

“Here’s what I looked like when I got INDEFINITELY BANNED from Twitch tonight,” she tweeted. “I don’t even know what to say, I’m just so sad and disappointed.”

Taylor told the Daily Dot that Twitch has not responded to her since she appealed.

“Twitch has not communicated with me or any of the other body painters who have received account suspensions,” Taylor said in an email. “I had received two previous 24-hour account suspensions for the same reason. I went through Twitch’s appeal process, but still have not received a response from my first appeal on July 17, 2019.”

On Feb. 20, Taylor painted one of Twitch’s tweets on her body. “Please watch us closely and hold us accountable,” the tweet said. She added on the post, “Twitch, we are holding you accountable.”

“The Twitch body-paint community deserves the clear guidelines and communication that were promised to us,” she wrote. “My channel has been wrongfully taken from me and I’m asking you to make this right.”

Taylor said she has been streaming on Twitch for almost four years and was a finalist in the TwitchCon Cosplay Contest twice. She tweeted that streaming is not just a hobby to her; it’s part of her identity.

Taylor said she wears pasties and paint with layers of liquid latex over the pasties, which she argues is compliant with Twitch’s terms of service.

“(You will not) create, upload, transmit, distribute, or store any content that is inaccurate, unlawful, infringing, defamatory, obscene, pornographic, invasive of privacy or publicity rights, harassing, threatening, abusive, inflammatory, or otherwise objectionable,” the guidelines say.

Fans of the Twitch streamer are demanding that Taylor’s banning be reversed.

Another fan said that “forkgirl” is “so talented and deserves the chance to express and show off her work.”

One fan, Bradley Downing, created a petition that by the time of press had 281 signers.

“We need to set a new standard for Twitch to protect the body painting community from autobanning,” Downing wrote. “So something like this doesn’t happened again on the platform and the community. “