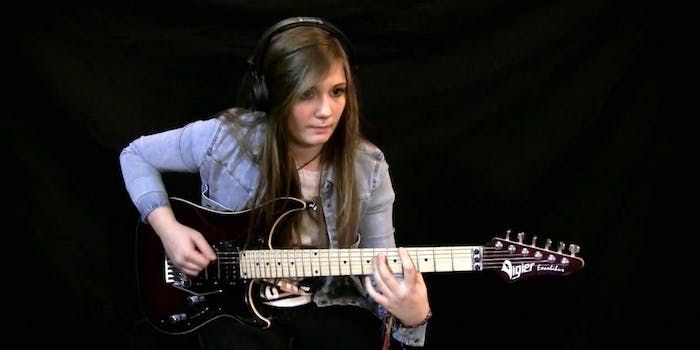 Thanks to GarageBand and ProTools just about every teenager with a pair of Beats by Dre headphones thinks they’re the next musical prodigy. But being a musician isn’t just about twisting knobs and screwing around with synths to make some lackluster remixes. To be a real artist you have to have skill.

If you’re wondering what that looks like, just peep this 15-year-old guitar prodigy that simply goes by Tina S.

Though you may not be the biggest fan of British power metal, you’ll certain enjoy the tremendous talents of this young lady who shred through a DragonForce song like a knife through butter. For seven minutes straight she decimates “Through Fire and Flame,” leaving our faces melted in puddles on the ground.

Now all we have to do is get Tina in touch with those kids who cover Led Zeppelin on xylophone and we’ll be able to save the future of music.