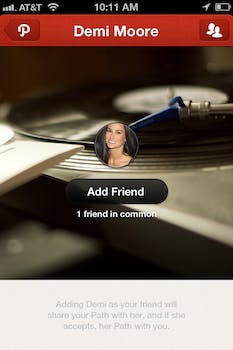 Dot Dot Dot: A Path in the storm

We don’t need Google’s Search Plus. We need a refuge from the Web crawlers.

This was a virtual celebrity sighting, mind you—on Path, the new mobile social network for just your close friends. I guess I know people who know people.

I dug around and confirmed that yes, that almost certainly was the former Mrs. Kutcher showing up in my Path stream. And I realized it made total sense.

Path limits your friends to 150. For a celebrity looking to escape the treadmill of friend requests, @replies, and comments from fans, it’s the perfect social network. Whether you’re Internet famous or regular famous, Path is that place where you can hide and just be yourself.

(Moore can’t escape her famous ex, though: Ashton Kutcher is an investor in Path, which might also explain her relative early adoption of it.)

But you don’t have to be famous to have things you don’t want to share with everyone. Around the same time I spotted Demi Moore, I also learned on Path about a friend’s new beau—her so-called “unblogged boyfriend.” I’d never have gotten that on Twitter.

Path lets you broadcast thoughts to Twitter, Facebook, Foursquare, and Tumblr, but you can also keep them just on the service. People sometimes self-mockingly bill these as “Path exclusives.” Or you can really go dear-diary at it and make an entry private, a memory for yourself alone.

The notion that we are more free to be ourselves in smaller groups seems lost in the thundering debate over Google’s new social search features.

The clunkily named Search Plus Your World suggests to me that Google has hired too many ex-Microsoft product marketers. I’m going to take Google expert Danny Sullivan’s suggestion and just call it Search Plus.

Search Plus is basically the Web plus Google properties. Oh, sure you might see the odd result from Yahoo’s Flickr, a nod to the idea that social properties exist outside the Googleplex, but let’s be real: Google is cramming its search results full of posts from its Google+ social network, photos from Picasa, and other material it controls.

Missing in action: Twitter and Facebook. That’s kicking up all kinds of mutterings about antitrust action: With its near-monopoly in search, should Google really be favoring its own properties to this extent?

I don’t think Twitter and Facebook really want the feds digging around into the terms under which they offer other companies access to their data. But I also think the whole argument is moot.

We don’t want to be Googled all day long. The bigger Facebook gets, the more public it is. Twitter has become the Internet’s default town square. All of these services fail at giving us a place to be ourselves, as opposed to providing a stage where we don our masks.

It doesn’t really matter whether our thoughts, photos, and relationships are searchable on Google, Twitter, or Facebook. That’s simply a question of who profits off them.

What matters is whether we have any say in where our life’s bits live.

Now that we’ve seen the latest version of Path, it makes total sense that Google tried to buy the startup for a reported $100 million, and that CEO Dave Morin rejected the offer.

Maybe Google+ would have become marginally better as Morin & Co. got absorbed into the borg. But we would have lost a refuge from this data duel.

We seek a port in the storm. And maybe Path lights the way.