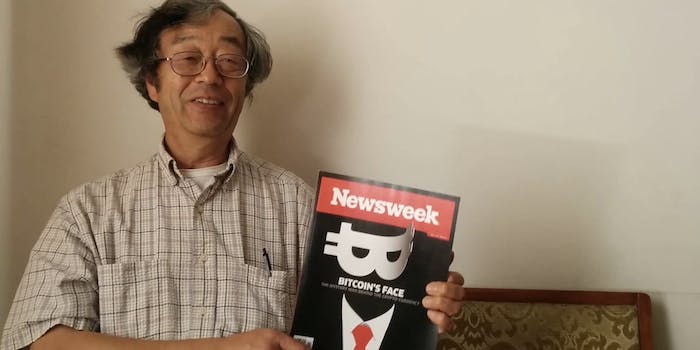 It's either the world's best consolation prize, or Dorian is a hell of a troll.

Dorian Nakamoto, who has said he suffered enormously after Newsweek claimed he is mysterious Bitcoin founder Satoshi Nakamoto, just got a 48 BTC ($23,000) consolation prize.

If he wasn’t a Bitcoiner before, he sure is now.

Thanks to a fundraiser held on Reddit’s r/bitcoin, cryptocurrency evangelist Andreas M. Antonopoulos presented Dorian Nakamoto with a Bitcoin wallet packed with donations from nearly 2,000 well-wishing users Monday night. Many donors believe his insistant claims that Newsweek named the wrong guy in their “unmasking” cover story.

The apparent debacle is not without precedent. Hal Finney, now paralyzed with ALS, was once suspected as the true Nakamoto. After a Forbes article concluded it wasn’t him, bitcoiners donated him more than 24 BTC ($11,700).

A key detail in Dorian’s repeated denials following the Newsweek story is that he’s actually struggling financially—which, if true, would contradict the image of the Bitcoin founder, who’s believed to have a fortune in it. Dorian and his brother insist he takes care of their elderly mother, and Dorian earlier said in a statement issued by his lawyer that he’d discontinued Internet service in 2013 “due to severe financial distress.”

Inspired by that, Antonopoulos created a fundraiser in March, and didn’t get around to closing it after the proposed one-month deadline. But that’s all the better for Nakamoto: Donations kept pouring in.

Nakamoto didn’t say what he planned to do with the money, or even if he planned to convert it to U.S. dollars, and his lawyer didn’t immediately respond to the Daily Dot’s request for comment. Dorian did, however, continue his stilted use of cryptocurrency terms, promising to become a “Bitcoin community person” and to “keep my bitcoin account for many, many years.”