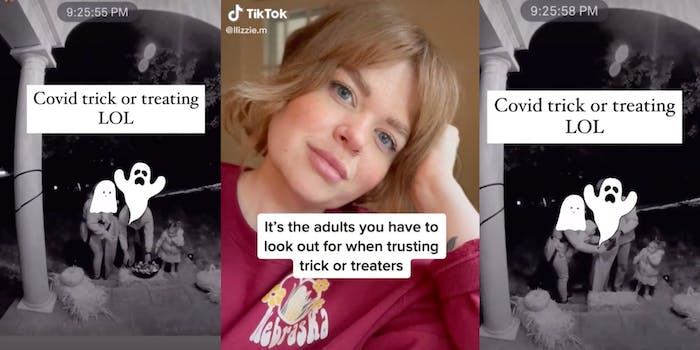 ‘Teaching your kids selfish things’: Doorbell cam catches parents taking all the candy while trick-or-treating with their children

'Teaching their children to do wrong and be sneaky.'

A TikToker was deeply disappointed when she played back her doorbell camera footage from Halloween.

“It’s the adults you have to look out for when trusting trick or treaters,” text overlay on the clip reads.

As a coronavirus precaution, popular TikToker Elizabeth Peck wasn’t personally handing out candy to trick-or-treaters. Like many people, she instead left a large bowl brimming with Halloween treats on her porch for trick-or-treaters to help themselves.

Those who’ve gone out trick-or-treating know these “self service” Halloween bowls usually have a sign instructing kids to just take one piece of candy so that there’s enough for everyone. Even without the sign, that’s the general spook season etiquette.

Well, two parents in Peck’s neighborhood completely bypassed that rule. In the black and white video, the parents—whose faces are obscured—are with their two young children. Instead of picking up a piece of candy or two, one of the parents takes the entire bowl and dumps it into his son’s bag. They then casually walk away.

Despite the video, Peck didn’t seem too upset.

“I was in bed eating candy and watching and laughing,” she captioned the video.

The viral video already has 1.2 million views and thousands of comments. In response to a few commenters, Peck replied that she definitely heard the mom say “hurry hurry.”

While Peck is pretty chill about the situation, people in the comments are sounding off with opinions. Many people are concerned the parents set a bad example for their kids.

“The biggest crime they committed is teaching their children to do wrong and be sneaky,” @albartlett98 wrote.

“Why you gotta ruin it for other people’s kids? Like really, teaching your kids selfish things,” McKayla Baker-Ellis commented.

Others said if they were in the situation, they would have tried to publicly embarrass the candy-hoarding parents.

“You shouldn’t have blurred the faces out, they deserve to be recognized if they’re gonna be acting like that,” @caffeinated_cactus chimed in.

“Print a screen shot and stick it on this year’s bowl and write ‘none for you lot!'” @bambalambi wrote.

The Daily Dot has reached out to Elizabeth Peck.