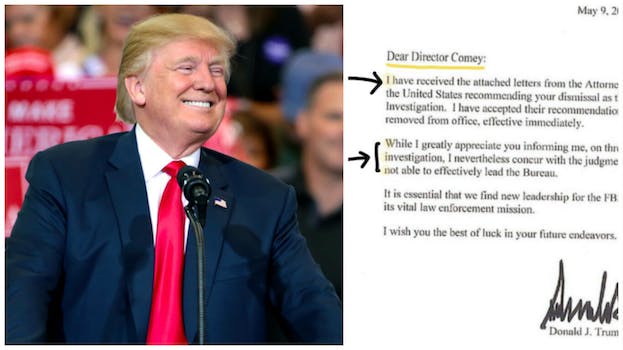 The denizens of Reddit’s Donald Trump-focused subreddit, r/the_donald, are the president’s most slavish devotees, referring to Trump himself as a “God-Emperor” who they believe is as infallible as their own maker.

Naturally, this leads the group of Trump stans to search for higher meaning in any of his actions, ascribing awe-inducing powers to the man, regardless of any plausibility. Thus, you constantly see Trump’s nonsensical behaviors explained away by him playing sixth-dimensional, multiverse-spanning chess, and you get a thing like this:

There, the first letter of the first, fifth, sixth, and seventh line spell “I win.”

Did Trump secretly plant that not-technically-an-acrostic acrostic in his letter firing Comey? It’s possible. But once you start seeing one thing, it’s certainly possible to see a bevy of other secret messages Trump may have been delivering.

So was Trump sending Comey one final boast? Or was he revealing an autoimmune disease he has?