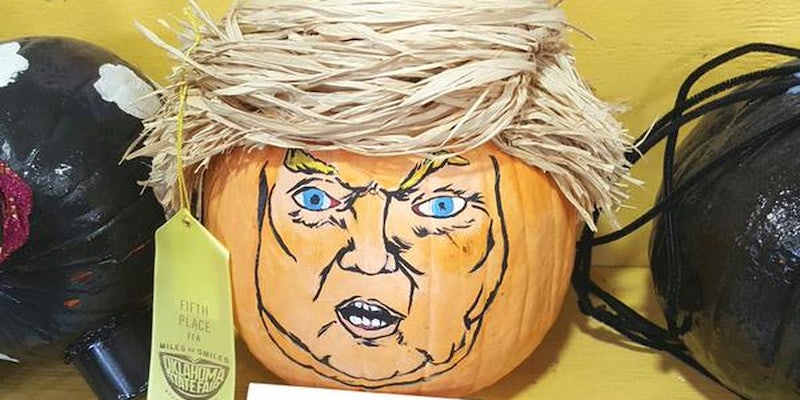 These Donald ‘Trumpkins’ will make Halloween even spookier

Almost as scary as the stuff he says.

Trade in your toothy jack-o’-lanterns and ghoulish gourds for something spookier this Halloween season: Trumpkins.

Jeanette Paras, a resident of Dublin, Ohio, made headlines earlier this week for her Donald Trump caricature, which was painted on a 374-pound pumpkin. She’s been transforming giant pumpkins into celebs since 1988, Fairy Godmothering the squashes into the likes of Miley Cyrus and Bill Clinton. With all the buzz around Trump this year, the GOP candidate became her next victim.

There’s even a sign in Paras’s front yard that reads, “Make pumpkins great again,” a reference to Trump’s campaign slogan.

While Paras’s 10-hour creation has taken the spotlight, there’s plenty of other people also making Trumpkins for the spooky holiday. Here’s some of the best carvings and paintings paired with some of Trump’s scariest statements, any of which should bar him from being president.

“Laziness is a trait in blacks.”

“You know, it doesn’t really matter what [the media] write as long as you’ve got a young and beautiful piece of [expletive].”

“Sorry losers and haters, but my I.Q. is one of the highest -and you all know it! Please don’t feel so stupid or insecure,it’s not your fault”

I DID IT I MADE THE SCARIEST HALLOWEEN DECORATION EVER ITS A DONALD TRUMPKIN pic.twitter.com/rPC1AvjCYy

“Our great African American President hasn’t exactly had a positive impact on the thugs who are so happily and openly destroying Baltimore!”