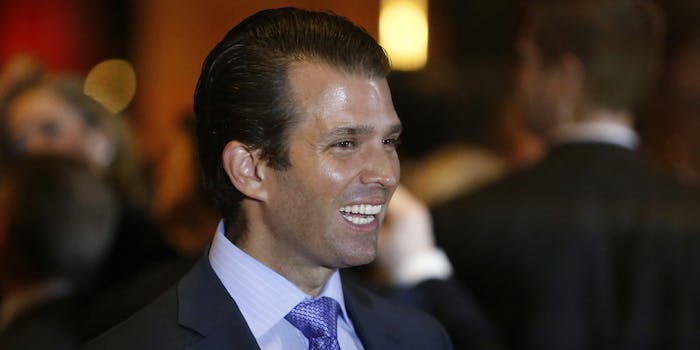 Everyone wants to know what the implication was.

For those who are blissfully ignoring our country being torn apart at its seams, last night brought one of the biggest revelations of Donald Trump‘s presidency—that he allegedly asked former FBI director James Comey to drop his investigation into former National Security Adviser Michael Flynn‘s ties to Russia before firing Comey.

The White House adamantly denied this version of events when the story broke.

This morning on Twitter, though, Trump’s son Donald Trump Jr. appeared to confirm some veracity to the story, retweeting Geraldo Rivera’s statement that Trump did no wrong in his reported conversation with Comey, saying only, “Truth.”

News Flash, @realDonaldTrump hoping @JamesComeyFBI cuts @MikeFlynn some slack because he is a 'good man' is not close to #Obstruction

Whether he was confirming it or saying an implied “even if” isn’t clear, but that didn’t stop Twitter, who is no fan of DJT Jr., from ripping him to shreds.

Donald Trump, Jr. basically just confirmed that the Comey memo is real. Independent sources had already done so, but he just did as well. https://t.co/QsqlEk4KUg

But it never happened so I'm confused 🤔😒 https://t.co/uzvIVMRCeH

Further confirmation that Trump pressured Comey to shut down the Flynn probe. The Trump clan is in very bad need of some new lawyers asap. https://t.co/Eq8guVvTMP

how long till Don Jr. claims he was hacked (by Seth Rich, or something) https://t.co/IoE8nrgsuG

Confirmation of the Comey memo, courtesy of Trump, Jr.
Thanks! https://t.co/L7rHjWd2SA

When my wife was a criminal defense atty, I would marvel at how her clients wouldn't follow her advice to STFU. https://t.co/R2WnYRMbq5

Apparently we’re moving from “It didn’t happen” to “OK, it happened but it was totally cool,” right on schedule. https://t.co/Vwq1myOV3a

As more than one person noted, President Trump has a tendency to contradict his own staff on Twitter in the morning.

Just this time, it was the son.

I said Trump will confirm the story on Twitter tomorrow morning. I didn't say which Trump… https://t.co/y3mGe6Cg5c

Update 10:22am CT, May 17: In response to the kerfulle, Trump Jr. denied he was confirming the existence of the Comey memo, saying he was only speaking about “if” it was true.

Give me a break. Me agreeing with someone's interpretation of a theory does nothing of the sort. You're trying way to hard. https://t.co/znVhc5FhWd