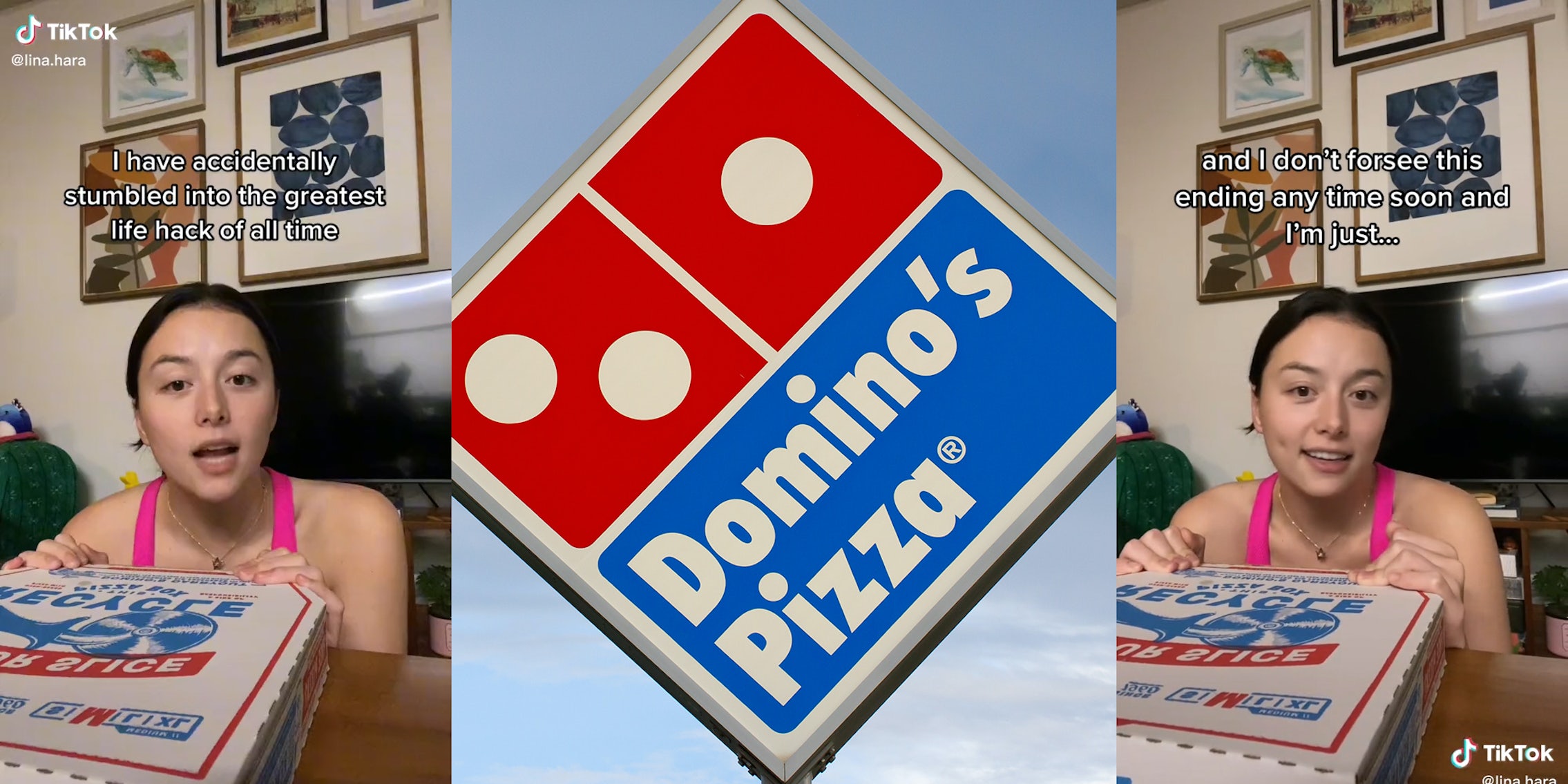 ‘I have accidentally stumbled into the greatest life hack of all time’: Customer explains how to get free Domino’s pizza

QUIET! I’ve been using these for free pizza for months.'

A lot of viral life hacks aren’t actually that useful, but this one is a certified winner. It only works if you live close to a busy Domino’s Pizza franchise, but if you do, you can supposedly game the system to get free pizza again and again.

Posted by TikToker Lina Hara, this hack has earned more than 3 million views in the past day—and we can certainly understand why. Posing with a pizza box, the TikToker explains, “My local domino’s takes a very long time to process orders,” typically an hour to 90 minutes. That’s fine by her, because she knows to plan ahead. However, when those pizzas do arrive, they’re accompanied by an apology email from Domino’s, offering her 20% off her next order… or a free pizza.

you are welcome for this information

This free pizza offer is a version of the classic “30 minutes or less” pizza delivery guarantee, which is no longer an official Domino’s policy in the U.S. The 30-minute guarantee was so popular that Domino’s continued with it even after two high-profile car crashes were linked to delivery drivers rushing to meet the deadline. The fast-food chain eventually removed the policy after a $79 million car crash lawsuit in 1993. However customers can still expect their pizza to be delivered in a reasonable time, which is why these “20% off or a free pizza” emails still exist. (If you don’t receive one, you can complain through the Domino’s Pizza Tracker.)

Unsurprisingly, this TikToker isn’t the first person to stumble across this method of getting free pizza. “QUIET!” reads the top comment on this TikTok. “I’ve been using these for free pizza for months. It’s the only way I can afford it.”

Others expressed concern that Domino’s might change their refund policy after this TikTok went viral, leaving comments like, “sometimes it is okay to gatekeep things because they’re for sure creating a new policy over this lol” and “Wait I don’t want this to blow up so they don’t fix the glitch lol.”

But while many people were worried about Hara giving away the secret to free pizza, others weren’t so concerned. “Honestly theyre probably aware of this but they don’t care because you’re still returning to order pizza,” one commenter pointed out, while another wrote, “As a former Domino’s delivery driver, I can tell you with certainty that as long as you tip your driver, no one at the store cares one bit.”

With big companies like Domino’s, this kind of policy exists because it’s seen as a worthwhile expense to keep customers loyal. So despite this TikTok’s viral popularity, the free pizza life hack is probably safe—especially since it relies on a pretty specific set of circumstances to work.

The Daily Dot has reached out to @lina.hara via TikTok comment.