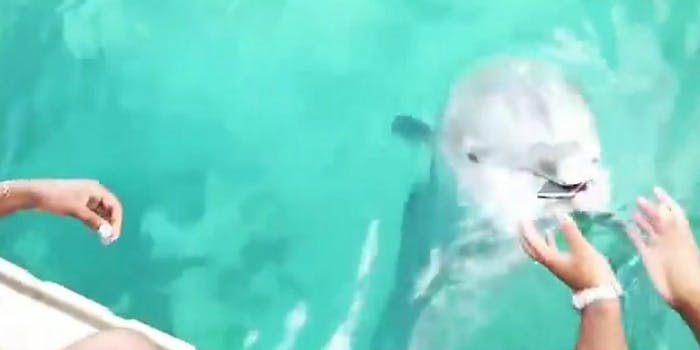 If only she had been a Miami Dolphins dancer.

When Miami Heat dancer Teressa Cee learned she’d be doing a photo shoot in the Bahamas, she was excited for the chance to swim with dolphins in the Atlantic Ocean. What she didn’t realize was that one of the dolphins would be her hero.

Cee dropped her phone in the ocean, but luckily for her, one of the nearby dolphins understood how expensive human smartphones were, and it dutifully retrieved the item.

Did you know that dolphins are even better at playing fetch than dogs? Watch Cacique the dolphin demonstrate.

The next step for Cacique is an obvious one: Join up with this Russian raccoon, put together an underwater cellphone retrieval act, take the show on the road, and make some money.

Either that, or Cacique could grab Cee a industrial-size bag of rice.