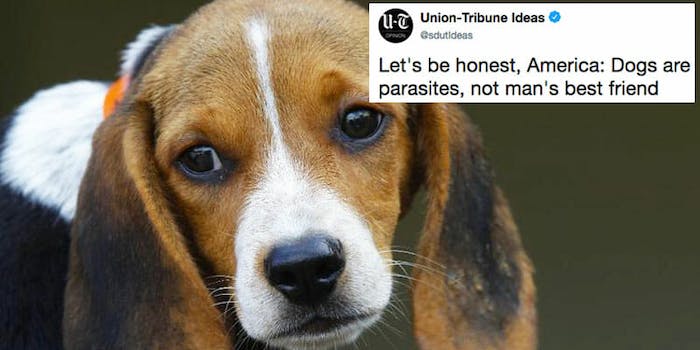 Has this guy ever even met a dog?

It’s a commonly accepted notion that dogs are man’s best friend. Except … [extremely Rob Low in The Grinder voice] what if they weren’t? That’s the argument being made by a columnist in a article for the San Diego Union-Tribune. Author Chris Reed starts out by lamenting the current state of dog ownership culture, which sees people spending more than ever ($69.5 billion in 2017 alone) to lavish luxury goods, spa treatments, and even cosmetic surgery on their fur babies.

He goes on to site a book nearly two decades old (somewhat ominously) titled The Truth About Dogs, published by Stephen Budiansky in 2000, which claims that since being domesticated as wolves, our canine companions have simply been playing the long con because, as he puts it: “mooching off people beat fighting it out in the wild.”

“Millions of years of wolf evolution have selected such behaviors because they are socially effective; thousands of years of dog evolution have fine-tuned such behaviors so that they are socially effective on people,” Reed cites from Budiansky’s book. “Just as we are genetically programmed to seek signs of love and loyalty, dogs are genetically programmed to exploit this foible of ours.”

To what should come as a surprise to literally no one, Reed’s article, uh, didn’t go over well on Twitter—a place where doggos are typically celebrated and not compared to disease-causing worms and protozoa.

And some of the responses were downright savage.

get the torches and pitchforks and call in sick tomorrow, we have work to do https://t.co/oE1iNT9kVc

I've found the dumbest article on the internet today. Your search is over. https://t.co/gWFFon6y78

There isn't a ratio large enough for a tweet this awful. https://t.co/JVZxdpN5Uq

The First Amendment was a mistake https://t.co/PwhUVvdOze

A lot of people also had the same (albeit funny) joke to make:

This is why you don't let cats write for your newspaper.

Dictionary.com once again got in on the action to ridicule the hot take:

Parasite: An organism that lives on or in an organism of another species, known as the host, from the body of which it obtains nutriment.

Philadelphia’s Morris Animal Refuge fired shots back by pulling a counter-troll on the Union-Tribune:

Sweet adoptable boy Comet has no idea that this piece is saying he’s a parasite. So he’s just happily grinning his big goofy grin at you, @sdutIdeas. The least you can do is RT to help him find a loving home! https://t.co/aWuOrIB5so 🐶 pic.twitter.com/vTxZt0aaLM

Loving lab-mix Monty and cheerful pug-mix Macy haven’t read the piece either – b/c they’re dogs, and can’t read – so they’re being all happy too. Definitely not parasites, @sdutIdeas! But they do need homes. Adopt! https://t.co/aWuOrIB5so. 🐶 pic.twitter.com/qXIPNZbrs4

At the very least, the author predicted the forthcoming outrage when his article first entered the Twitterverse yesterday.

Over-under on when I'll get my first angry Twitter response over this column: In eight minutes. #SportsBookOfLifehttps://t.co/7EQSuH0G2J

Eight minutes was probably being too kind.