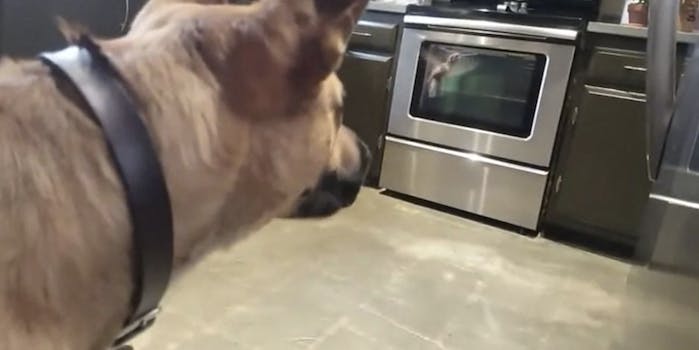 Witnessing different animal species interact with each other is one of the many beauties of the Internet, but this friendship is particularly heartwarming.

Rex the dog and Hummer the hummingbird became inseparable pals when the former saved the latter from dying after she fell from a tree.

“It was this little creature,” Ed Gernon, Rex’s owner, told CBS LA. “This fragile creature that the whole world wanted to kill and [Rex] was trying to protect her, so I thought I’d go the distance.”

Nursed back to health by Gernon, Hummer became a member of the family, never leaving Rex’s side for anything.

“Wherever [Rex] was, she wanted to be close by,” Gernon explained. “She even started bathing in his water bowl, killing time while he ate before she’d start playing with him again. So strange, but amazing.”

It’s awesome to watch, as Hummer just zooms around Rex as if to say: “What’re we doing now? What do you wanna do? Let’s do something!” The beauty of all of this is that Gernon had actually adopted Rex last year, rescuing the German shepherd mix from a life of fighting other dogs and killing cats. Looks like Rex has learned well from his owner’s kindness, because now he’s a rescuer in his own right.

Unfortunately, mating season has arrived for Hummer, so Gernon knows that the hummingbird might be leaving some time soon. Still, it’s so cool to a bond form between a dog and bird. Hoping we’ll see more adventures from Rex and Hummer in the future.