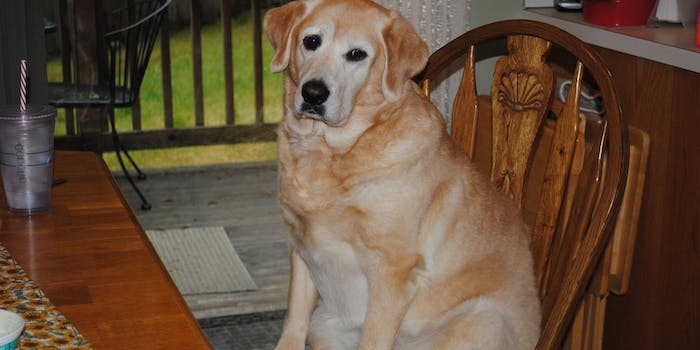 He'll have the macaroni and cheese, please.

Like most dog owners, I’m well aware my dog likes to think of herself as a short, fuzzy human being. Sure, she lacks thumbs and shuns pants, but getting to sit on the sofa or snack on “people” food fills her with unrestrained glee. She also likes to weasel her way into the driver’s seat of the car, though I explained to her “dog years” don’t count when applying for a drivers license.

But any passing thoughts I may have had about letting her join me at the table for dinner ended with this video. Using a hooded sweatshirt, this guy created a very hungry a man/labrador hybrid, albeit with reasonably good table manners. It’s equal parts hilarious and creepy.

Unfortunately the joke’s on this dog’s owners. Now that he knows the glory of having hands to shovel food into his face, he’s going to want to do this every night for dinner.