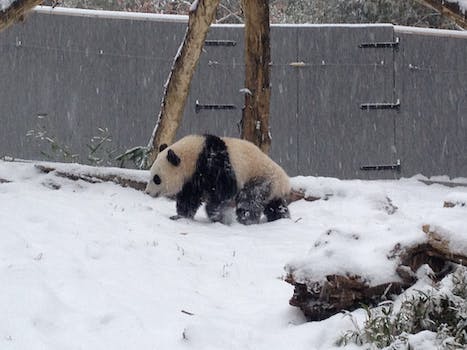 It’s Tuesday. We’re still a whole day away from Hump Day. The week feels long and intractable, particularly if you’re living in one of the Mid-Atlantic states currently recovering from a surprise snowfall. The solution to these winter doldrums is a baby panda playing in the snow.

The Smithsonian’s National Zoological Park, better known as the National Zoo, understood exactly what we needed and gave it to us, in the form of a minute-long clip of Bao Bao, the zoo’s 16-month-old panda cub, frolicking on her first-ever “snow day.”

The Zoo itself was closed to the public today because of the weather, but while the tourists were away, Bao Bao did play.

According to the Zoo, Bao Bao “totally rocked it” out there in the snow.

Today was Bao Bao's first time playing in the snow! And she totally rocked it. pic.twitter.com/gT3dDa92fh

If you want to see other National Zoo inhabitants enjoying the weather, the Zoo’s got you covered there too.