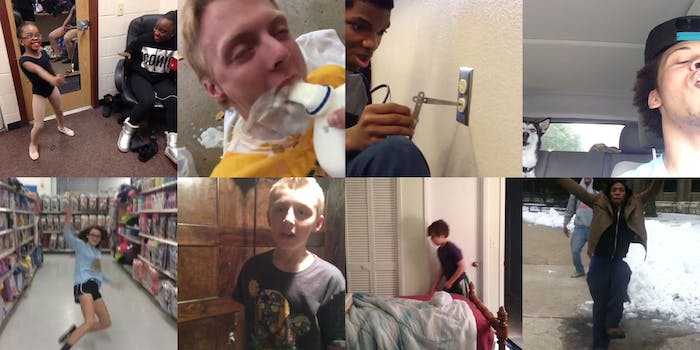 Brave or idiotic? You decide.

Only one app really changed the way we viewed the world in 2014, and it did it in just six seconds.

This month, you’ll read a lot of year-end articles proclaiming that this site or that app was the social media platform of 2014. Authors will offer up lofty cultural contexts and pander to you pretentiously as they trip over themselves to explain why Ello or Yik Yak or Yo revolutionized the way we interacted.

Nope. Vine defined the year. No other app caused its users to sexually defile a hot pocket or choke themselves half to death only so they could be immortalized by the Internet. From self-immolation to electrocution and everything in between, people stopped short of nothing to loop themselves to six seconds of digital fame.

Everyone wanted to get in on the action.

But in their eagerness, some people might have… overdone it.

People created viral sensations like whaling just to get their six seconds of limelight.

Watch out for the ice, dude.

Others rode the coattails of popular memes to Internet glory.

Or the pass-out challenge?

This guy tried piercing his own ear with a Nerf gun.

This kid gave an electrifying performance.

Nothing changes the fact that some stars just burn brighter than others.

Like Tony Gomez, who lit his butt on fire.

Indeed, in 2014 people tried to go viral on Vine in all sorts of ways.

And showing off their goods in failed trampoline backflips:

But they all rose to the challenge—lots of challenges—in their own way.

In 2015 and beyond, let us always endeavor to vine our best selves. As F. Scott Fitzgerald wrote, “So we beat on, boats against the current, borne back ceaselessly into the past.” Like a loop, you see. A six-second loop.