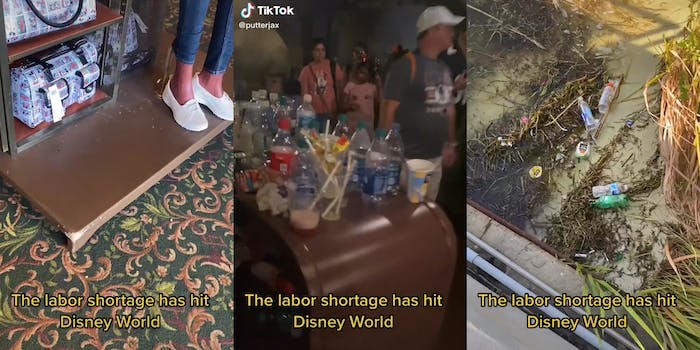 'Maybe they shouldn't have fired everybody about 6 months ago.'

A viral TikTok video shows trash scattered all across Disney World, prompting a debate over wages and labor shortages in the comments section.

The video was posted on July 25 by a TikToker who has over 120,000 followers, @putterjax. It’s gone viral, with 1.3 million views, but it’s unclear if the video was filmed by @putterjax.

“The labor shortage has hit Disney World,” text overlay on the video reads.

The clip shows trash scattered across different parts of the park.

Disney reportedly laid off 32,000 workers—primarily workers of the theme park— during the coronavirus pandemic. Disney World has reportedly been having trouble finding workers as things reopened, even reportedly offering $1,000 bonuses to new workers.

Viewers were quick to bring this up in the comments section of the video.

“Maybe they shouldn’t have fired everybody about 6 months ago,” one said.

And, of course, some alleged the mess seen in the clip is the result of low wages—Disney World pays its theme park employees anywhere between $9 and $23, according to Zip Recruiter. However, an overwhelming number of commenters pointed to the labor shortage as the reason.

One viewer who claims to be a former employee said the low pay and lack of advancement opportunities, combined with the high risk of exposure to COVID-19 and abusive behavior from some park-goers, makes working at the Magic Kingdom right now far from worth it.

The Daily Dot has reached out to @putterjax and Disney World.