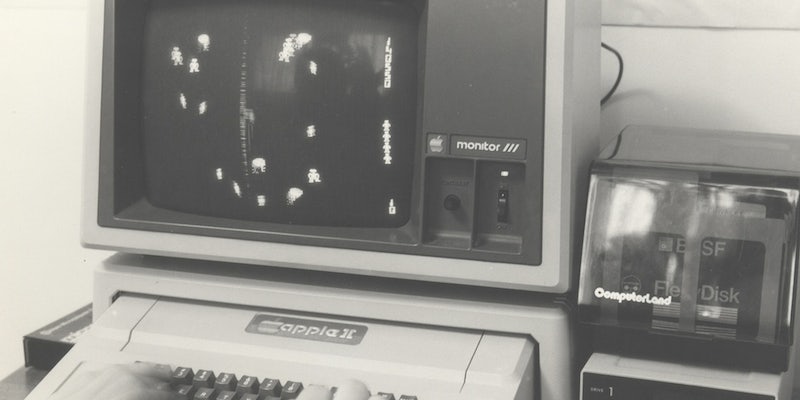 Photo via Randy Troppmann/Flickr (CC BY 2.0)

We have bigger things to fear than robots.

The growing consensus on teaching students to code is often focused on our inevitable competition with a robotic workforce. The jobs of tomorrow, in nearly every sector of the economy, will require a familiarity with software that surpasses the current requirement of making spreadsheets and writing emails. If the United States is to remain the source of innovation it has been for decades, we’ll need to give the next generation of workers with the tools necessary to build the next Apple, Facebook, or Uber.

Like most conversations about “the children,” the focus is on the future.

But in the present-day workforce, American workers are losing a battle not to software but to the world economy. In recent years, tech companies like Microsoft and Google have been lobbying for the expansion of the federal government’s H-1B visas, which allow highly skilled foreign workers to come and work in the United States.

While the number of such visas is currently limited to 85,000, a network of American companies and mostly Indian outsourcing firms have been steadily replacing Americans in the industry with a cycle of funneled temporary workers who work for much cheaper than Americans do.

Most recently, Disney fired 250 employees from the data systems department of its Orlando amusement park and forced them to train their replacements (all of whom Disney obtained through an outsourcing firm) for 90 days if they wanted to see their pensions. Last February, Southern California Edison—one of the largest utilities in the country—replaced 500 employees with H-1B workers to the growing concern and furor of the IT industry.

Such large-scale cases have attracted the attention of a bipartisan group of 10 Senators, including Democratic Presidential candidate Bernie Sanders, who are demanding an investigation into the impacts of the H-1B program on American workplaces and the American economy as a whole.

If this sounds like the beginning of a xenophobic rant against foreigners after American jobs (“dey terk ow jerbs”), consider the real and negative impacts this program has on not just our workforce but our pace of innovation. These workers rarely apply for full residence or citizenship and usually work for a year or two before departing with their income and new skills back to their home country. What companies have come to rely on is a consistent flow of such labor that is generally cheaper and more plentiful than American labor.

By training American students earlier in the computer science skills that could train them for the job positions being filled by H-1B visa workers, we can keep those jobs and the innovation they breed in the United States not for patriotic reasons but simply to keep America competitive in the world economy.

It’s a consistent fact that students exposed to computer science in high school are far more likely to pursue a computer science degree in college—and then go on to work in the technology sector. A study by the College Board found an eightfold increase in the likelihood of a student entering an IT field if offered an AP Computer Science class in high school.

But sadly, only five percent of high schools in the country offer such a class. Most schools that teach computer science don’t teach programming as its own subject, and a lot of schools think “Computer Science” means learning how to type or use social media. Last March, Arkansas became the first state in the nation to mandate that each public school provide a higher-level computer science course.

It’s worth pointing out that an education in computer science can help students compete against visa workers in fields outside of Silicon Valley. H-1B visas are hotly contested among tech companies, but many other industries are lobbying for an increase in the program so they can share in its “benefits” as well.

The vaguely named Partnership for a New American Economy is one of the larger and louder proponents of the visas and has on its board a wide variety of oligarchs, including News Corp CEO Rupert Murdoch, Disney CEO Bob Iger, former New York City Mayor Michael Bloomberg, and the CEOs of Boeing and Marriott. It’s been said that software eats the world, and it would seem cheap foreign labor will follow it.

Proponents of increasing the visa program, such as Google, like to point out how many of the biggest names in tech have been founded by foreign workers. “Immigrants have founded 40 percent of companies in the tech sector that were financed by venture capital and went on to become public in the U.S., among them Yahoo, eBay, Intel, and Google,” says Laszlo Bock, Google’s Senior VP of People Operations.

One paper from Agnes Scott College has become the new gospel of tech companies after it claimed “adding 100 H-1B workers results in an additional 183 jobs among U.S. natives.” However, a recent report from economists at the Treasury, Notre Dame, and the University of California has found those claims to be dubious at best. Their paper, using government data, found areas that saw an increase in H-1B workers saw no change in local employment rates, suggesting a 1-to-1 replacement of American workers by foreign workers.

The oft-cited claim that foreign workers breed innovation is also false—an increase in H-1B workers at a firm actually had a negligible effect on the number of patents offered. The only real effect the researchers found was an overall decrease in wages and an increase in company profits.

While confirming the worst nightmares of those in the tech sector, the study should impact how we’re viewing not just the workforce of the far-off future but the immediate prospects of Americans today. The widespread race for cheap H-1B labor is lowering wages, decreasing innovation, and thinning out an already dangerous job market. The more we train kids today to compete in such a volatile workforce, the more we benefit as a society from the skills and technologies they develop here.

Photo via Randy Troppmann/Flickr (CC BY 2.0)