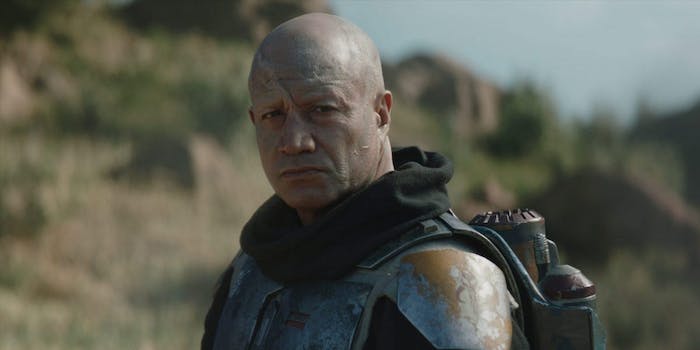 The controversial name is being phased out of 'Star Wars' merchandise.

Boba Fett’s spaceship may not be as iconic as his jetpack, but it has a recurring role in the Star Wars franchise, appearing in Attack of the Clones, the Clone Wars animated series and The Mandalorian. Inherited from Boba Fett’s father Jango Fett, it’s known by the name Slave I. But by the time The Book of Boba Fett arrives on Disney+ this December, that name will no longer be in use.

In new Lego sets, the ship is simply titled “Boba Fett’s Starship.” According to a new interview with with a pair of Lego Star Wars designers, the old name is being phased out across merchandise for the franchise.

The name Slave I had been mildly controversial for a while. Not in the sense that there was a major campaign to get it changed, but many people did find it a little weird and uncomfortable. While the Star Wars franchise includes plenty of depictions of slavery, the name “Slave I” doesn’t have any particular significance to Boba Fett and sounds kind of jarring in context. So it makes sense for Disney to move away from using a name with such problematic connotations. Additionally, it’s just better branding to refer to it as “Boba Fett’s Starship” on merchandise, because “Slave I” doesn’t have much mainstream name recognition.

There is, inevitably, a backlash to this decision. Some fans are mad about Disney making a change to the long-established canon, latching onto it as proof of Star Wars becoming too politically correct. Mark Anthony Austin, who played Boba Fett in the 1997 special edition of A New Hope, mocked the decision on Twitter, joking that Disney should rename the Death Star due to its violent connotations. But this backlash probably has more to do with the ongoing Star Wars fandom culture wars than any widely-held attachment to the name. A vocal minority of fans object to to any attempts at making Star Wars more inclusive to a diverse audience, and renaming Boba Fett’s ship is precisely the kind of minor-but-positive update that draws their ire.

At the moment, it’s unclear whether Boba Fett’s ship will receive a new name or simply won’t be referred to by name on-screen. The name “Slave I” may be quietly retconned, or The Book of Boba Fett may see Boba Fett explicitly rename the ship himself.