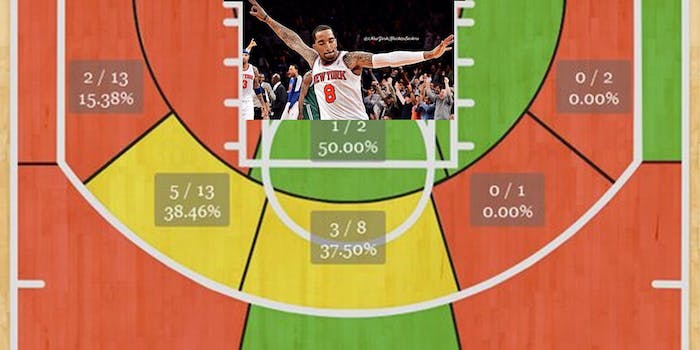 The Knicks star has hit a cold streak, but that hasn't stopped him from shooting in the playoffs.

Have you already completed your Official NBA Bandwagon Transferal Form? If so, there’s a new way to diss New York Knicks guard J.R. Smith, thanks to the marvels of a real-time Twitter account and the Internet’s penchant for in-your-face memes: @DidJRSmithMiss?

It’s been a rough fortnight for the New Jersey native who came off the bench this season to boost the Knicks into the team’s first appearance in the NBA semifinals since 2000. Just days after being chosen the Sixth Man of the Year, Smith got ejected and received a one-game suspension for elbowing another player. He’s been on shaky ground ever since, hitting a cold streak against the Indiana Pacers that hasn’t been seen since the days of John Starks.

From there, the Twitter account proceeded to document every attempted shot Smith took in the game—accurately, if snarkily.

No, though it was a free throw.

Yes, and his mom’s pissed.

I mean, what do you think?

The Twitter is an interesting deviation from the wide crop of “Yes/No” meme websites that have sprung up around the Internet in recent years. Things like Has the Large Hadron Collider Destroyed the World Yet? are always good for a laugh (as well as cosmic perspective), but they lack the real-time resourcefulness of a Twitter feed whose sole purpose is to be the thorn in the side of Smith fans—or Team Swish, as they’re more commonly called.

So far, Smith hasn’t commented on the Twitter account. He has been holding himself personally at fault for the Knicks’ troubled playoff, calling his own game play “unacceptable.” The Knicks face elimination tomorrow night at 8pm EST.

Whether or not Smith’s bittersweet run with the Knicks has come to a close, one thing is certain: Long after fans have departed his bandwagon, the shot-by-shot Twitter account will still be around to record the lulz.