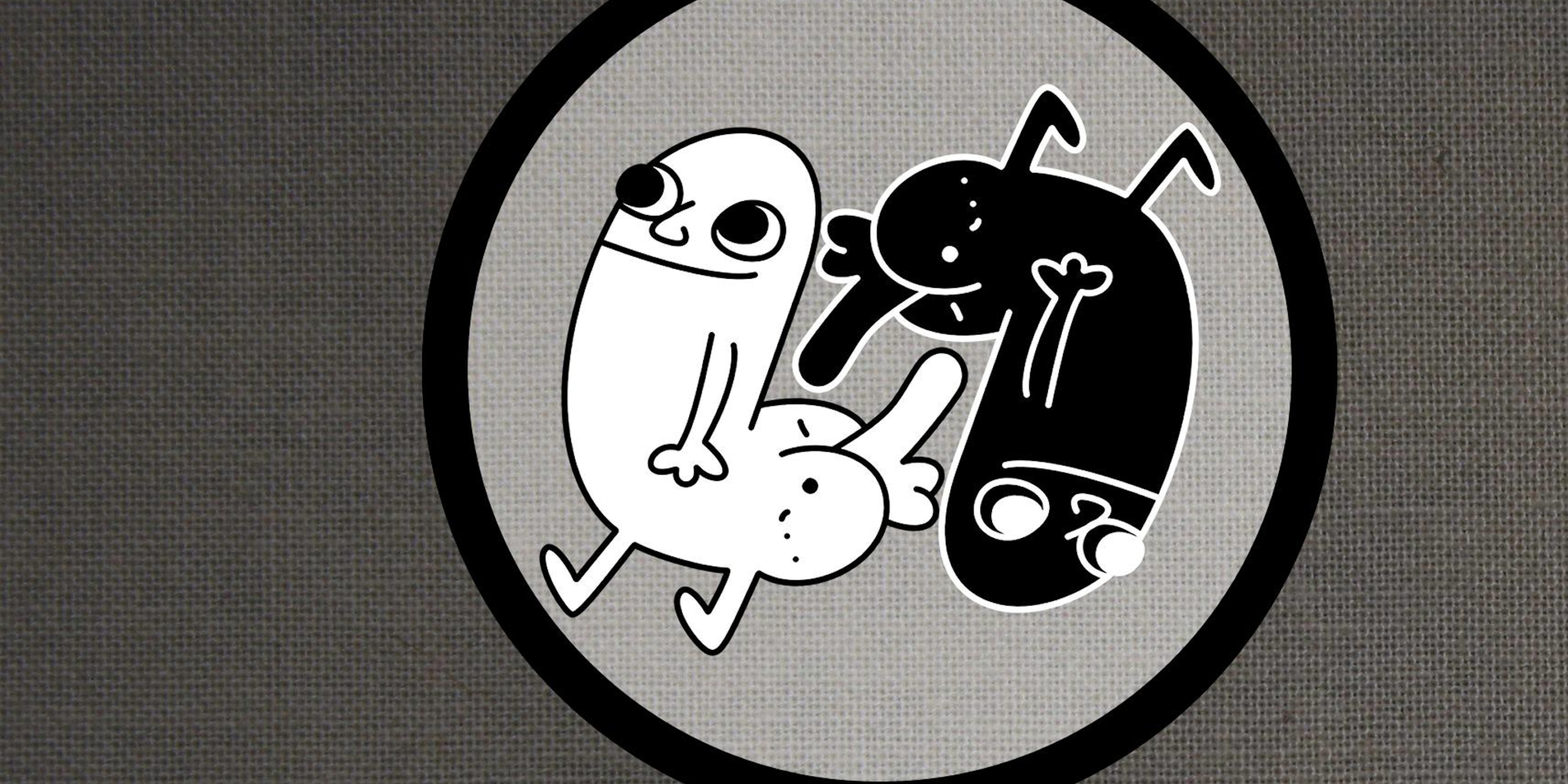 How the Dick Butt meme became the Rickroll of the future

The internet history of a semi-NSFW hot dog dude that became a GIF artist’s best friend.

When I asked artist K.C. Green about the inspiration behind a viral cartoon character he created in 2007, I expected a phrase like “it came in a dream” or “it happened to me once.”

I got “stupid” instead.

“It’s simple,” Green, creator of the comic series Horribleville, told me. “The joke was that I wanted to honor trees for what they gave up. Then I go and draw the stupidest thing. I thought, What is the stupidest thing? And then I had my answer.”

That answer was Dick Butt, a strange-looking hot-dog-shaped figure. Over the next several years, it perplexed and entertained the internet. But only recently did it really take off. Here’s the full story.

The origin of Dick Butt

The late ’00s were a golden era of memes, a time when LOLcats were still cute and the Obama girl was still relevant. In 2008, the measuring stick against which all memes were measured was the Rickroll, the legendary bait-and-switch featuring Rick Astley’s 1987 hit “Never Gonna Give You Up.” So when Gawker crowned the Dick Butt as the next Rickroll, netizens collectively held their breath for its meteoric rise to meme greatness. But the phallic character was too racy and juvenile for most of America.

Dick Butt found its home on lesser-known sites like deviantART and 4chan, home to all things random, vile, and absurd. This is where the image, as described by Know Your Meme, was used in three distinct ways:

1. A simple image depicting the character.

2. An image wherein a character usually expects something and is disappointed when he finds out it is only a picture of Dick Butt.

In 2011 and 2012, Dick Butt finally hit its stride. It took a massively popular remix of the Fresh Prince of Bel-Air theme song.

“When it first took off, people thought that original comic was stealing Dick Butt for its use,” Green told me. “I guess it helped make money for me when we made the shirt of it. However, that was mostly to stop people from stealing the design for themselves and making quick CafePress or Zazzle shirts. I mostly helped myself make more money by continuing to make comics.”

Everyone that watched me livestream some games – I hope you enjoyed watching my DICKBUTT use a fiery pube explosion. I luv u.

The character gets edited into movies

Thanks to GIF artists on Reddit and Tumblr who turned the meme into hilarious works of art, Dick Butt finally found its place on the web—spliced into clips of films like Jurassic Park, Burn After Reading, and The Shawshank Redemption.

Life after the comic went viral

Green has moved well beyond Dick Butt. He publishes a comic series called Gunshow, which is about things like “bones and blood and sadness and love and also nerds and hell and dogs and death.” He still doesn’t understand the internet’s fascination with that one single panel of his work.

“No one can expect these things”—memes—“to resonate,” he said. “It’s in the public’s hands.” All you can do is “just watch and shake your head.” 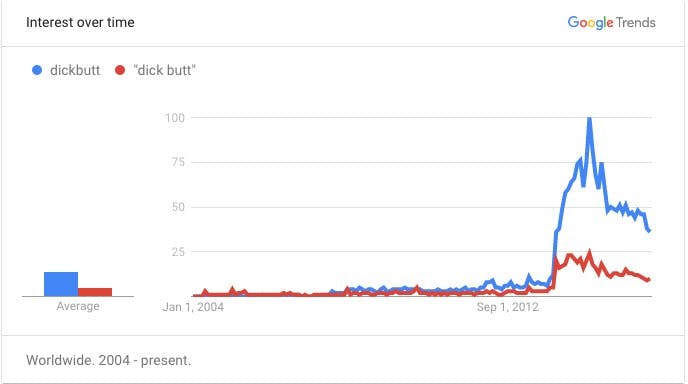 Interest in Dick Butt has declined significantly since its 2014 peak, but the subreddit dedicated to everyone’s favorite comical penis-buttocks hybrid still sees new posts almost every day. And, as ever, any image where someone holds up a piece of paper is an invitation to Dick Butt.

The 2016 election, for example, has provided plenty of new opportunities: 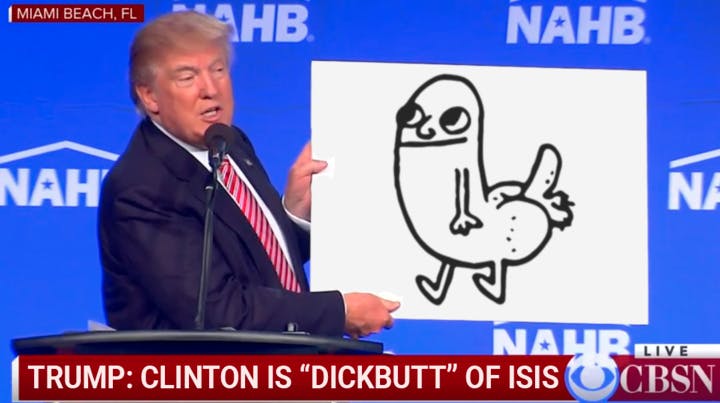 What may be the greatest ever covert use of Dick Butt occurred in 2015, when the character appeared as part of the UPS logo that was scheduled to adorn the side of a Formula 1 Ferrari. 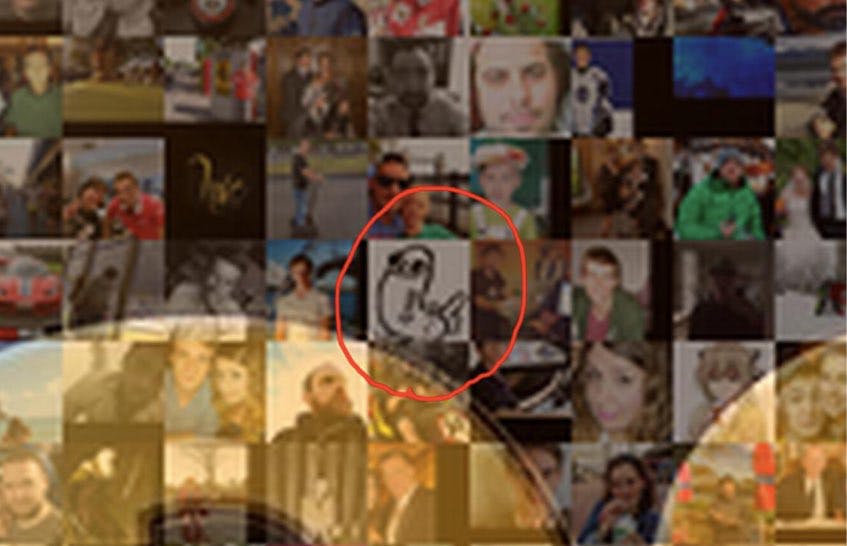 Unfortunately, UPS caught onto the joke and was able to edit Dick Butt out of the logo and prevent it from appearing in an actual race.Meanwhile, Dick Butt creator K.C. Green has stayed as relevant as ever. He scored another meme with his illustration of a dog insisting “this is fine” as his house burns down around him. The panel speaks as much to the zeitgeist of 2016 as Dick Butt did to the internet of the early 2010s.