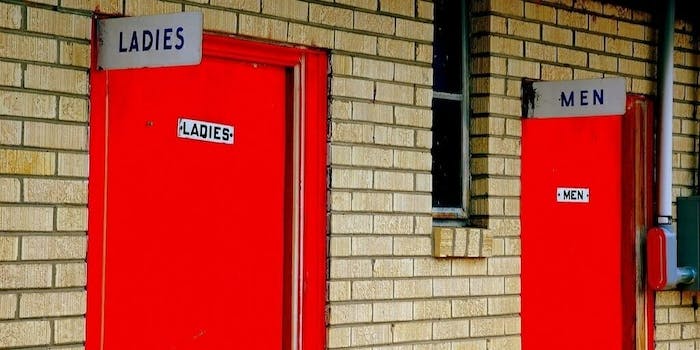 She called him a “pooping-farting robot.”

And you know what’s even worse than that? Having that 4-year-old daughter encourage you, count all the number of poops you’re making, and comment on the stench you’re producing.

Welcome to the special hell of Clint Edwards, who posted the story on the No Idea What I’m Doing: A Daddy Blog Facebook page. It’s a story that might make you cringe out of sympathy while pleading to whatever or whomever you pray to that this never, ever happens to you.

As Edwards wrote, his family was on a 12-hour road trip when his bowels began to bark, and though his wife and two older children were in the van while he was in a convenience store with his 4-year-old girl, the urge to go was too intense and he had to bring his daughter inside the stall with him.

I’m not sure what happened exactly, if I’d eaten something wrong, or if it was the stress of traveling with kids, but what I do know is that my 4yo daughter is the Richard Simmons of pooping. I’ve never felt so supported in anything in my whole life. She commented on the size, smell, and sound. “Wow!” She said. She commented on my work ethic. “You’re trying so hard!” At one point I had to actually push her face away from the business end of things as she clapped and cried “You’re doing it, Daddy! You’re doing it!”

Edwards wrote that even though Aspen sometimes faces potty issues herself, she’s so used to positive reinforcement during her potty training that she gave that encouragement right back to her dad. Especially when she called him a “pooping-farting robot.”

Well done, Chris. And well done, Aspen. And well done to the poor dude one stall over who kept himself somewhat under control while this scene played out next to him.

We stopped at a gas station in nowhere Oregon, two hours into a 12 hour road trip to a family funeral, when the diarrhea…