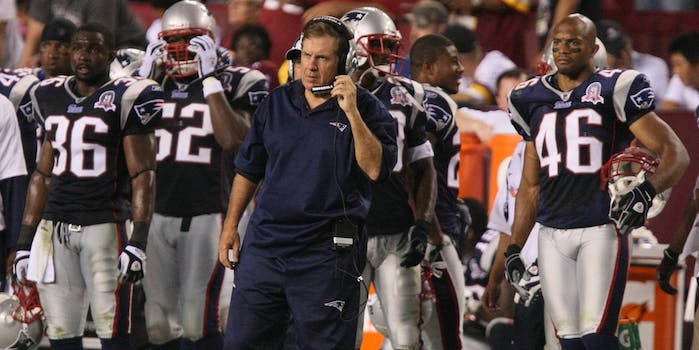 The #DeflateGate controversy proves the NFL has learned absolutely nothing

In a culture where no one's held accountable for their actions, why should #DeflateGate be any different?

As if the NFL hasn’t been rife with enough controversy for one season just yet, everybody’s favorite juggernaut is under the magnifying glass yet again. The New England Patriots are currently being investigated over suspicions that they may have been tampering with footballs during Sunday’s AFC Championship game against the Indianapolis Colts. Namely, investigators suggest they may have been deflating their pigskins on the sidelines.

It’s not the first time the Patriots have been in hot water for meddling with gameplay, mind you—remember “Spygate?” In 2007, coach Bill Belichick was fined for sending team staff to tape other teams’ defensive signals at practice. Accordingly, we currently live in the world of #DeflateGate, since everything controversial in modern popular culture now gets a -gate suffix.

Glad to hear the NFL taking about having the right air pressure!

Check your tire pressure people!
No one wants 2b apart of #DeflateGate

I would never deflate my balls. #DeflateGate

As investigation into the situation continues, it raises the question of whether the Patriots will be exonerated—or let off with a relatively light slap on the wrist—in keeping with a cultural shift toward failing to hold high-level people and organizations accountable. In the last year, American culture has become an environment where those in power do the least time for their crimes, and the NFL provides ample examples of the phenomenon.

Bill Belichick, for his part, has declined any comment, unsurprising given his long-standing disinterest in accounting to the media for much of anything. But it’s yet another black mark against a strange, sobering year for American professional football. In the later part of the season, teams have been involved in controversial finishes, brazen slights against the rules, and a seemingly higher level of scrutiny of the league than was initially expected when the year started.

That’s not to say that people aren’t becoming more critical of the NFL in general; in the Internet age, it’s easier than ever before for people to gather on Twitter and contemplate at length whether Roger Goodell is, in fact, the second coming of the Antichrist. But the 2014-2015 season will go down in infamy in certain respects as the season in which football’s skeletons came bursting out of the closet.

Even when the independent investigation into the Ray Rice–Janay Rice elevator assault concluded that the NFL could have done more to delve into the matter, Goodell and the team owners ultimately got away scot-free, though it could be argued that Goodell suffered in the court of public opinion. But unlike a real court, the public can’t take your job away, at least not directly.

This is on top of Greg Hardy, Josh McNary, Junior Galette, Jonathan Dwyer, and the other players accused of domestic violence or sexual assault in the past year. This is on top of Adrian Peterson, who took a plea deal for assault charges as the result of excessively violent discipline against his four-year-old. And that only includes just this season alone.

The Rice case was unpleasantly illustrative of the modern culture of the NFL, but if it accomplished anything—other than exposing the seedy, ugly underbelly of aggressively blind sports fandom—it was opening a much larger dialogue about the NFL and its many troubling facets, even as the league has never been richer.

Professional sports are as beholden to a culture of violent masculinity as any other facet of modern American society, but what needs to be discussed further isn’t just the culture on the field. While it’s simplistic to vilify all athletes by the behavior of the worst among them, it’s undeniable that the Rice incident doesn’t just exist in a vacuum. There can’t be a Ray Rice without a Stephen A. Smith going to bat for him, after all.

But what warrants further dialogue is the culture off the field, the one controlling the league. For instance, if any NFL team is willing to take the vicious PR hit that would come with it, Rice is eligible to play in the league again as soon as next year. And within the boundaries of pure law, and tabling ethics, it makes sense; Janay Rice opted not to press charges, the NFL was exonerated of any wrongdoing, and so Rice has the right to play again.

However, the public can’t un-watch that video, which leaves its viewership at an impasse. So what do you do, then? Abandon one of the simplest, most accessible forms of cultural effervescence we have left in an era of technological disconnection? Boycott the NFL in the hopes that it will eventually change? Or do you keep going with a critical eye? Is it a cop-out if you do? This isn’t the easiest situation to negotiate.

Sports Illustrated’s Michael Rosenberg hits on this point: “Belichick prides himself on being a football historian, and a lot of this is only ‘legal’ if you come from the old-time ‘if you ain’t cheating, you ain’t trying’ school of ethics. That doesn’t make it right, or fair. Or even, if you want to get technical, legal.”

This is a mentality that’s prevalent in football but goes beyond that. The NFL, in this respect, has become a microcosm of American culture over the course of the past year, a space in which circumvention of the rules is viewed as standard procedure and doing so, if you’re at the right level of society, can be protected by your contemporaries. There can always be a Belichick as long as there’s a Goodell somewhere up the ladder.

In the case of #DeflateGate, if you’re watching a sports organization that you already suspect of being corrupt from the top down, how do you reconcile that with the pleasures conferred by fandom? In a modern cultural climate in which ethics are too often mistaken for doing anything you like as long as somebody technically can’t restrain you from doing so, from shouting matches in Internet comment sections to our sports, there has to be some kind of pushback.

It doesn’t help that this happened to the Patriots, of all teams, one of the most irrationally despised NFL franchises for everything from its perennial success to the overwhelming whiteness of its fan base to its head coach, whose steely demeanor doesn’t exactly make him the kind of guy that people root for when situations like this come to light.

And maybe all this ends up being bunk. It’s early in the proceedings, and that requires acknowledgement. Maybe the balls were just deflated for an entire game. But those “maybes” are starting to pile up for the NFL. Maybe they hadn’t seen the Rice tape. Maybe the many players accused of wrongdoing in recent years are all just being framed. Maybe it’s all in our heads.

But maybe it isn’t. And if that maybe doesn’t shake out, we’re going to have finally consider what we’re rooting for when we watch the NFL. Professional sports, like any other facet of mass culture, can unite us and give us a higher standard to which we can aspire. They can also reflect the worst parts of our society. And with the Super Bowl coming in less than two weeks, it’s a bad time for people to have their attention drawn to it yet again.