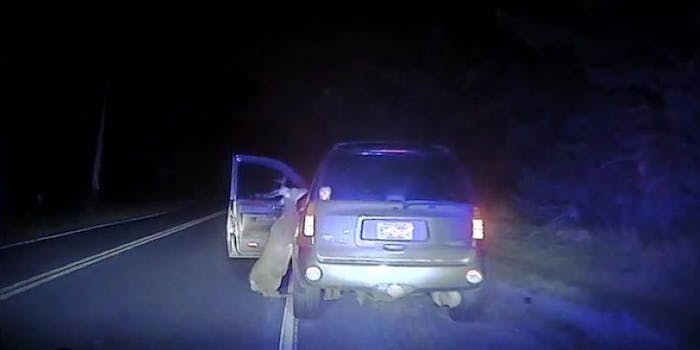 This deer didn't take kindly to the attempted hit-and-run.

A deer was minding his own business on a New Jersey road a couple of Saturdays back when his night suddenly took a turn for the being struck by an SUV. Understandably angry and probably disoriented, he circled back to confront the rude driver who’d hit him.

We know this because a patrolman was passing by at the time and caught the whole thing on his dashcam, and the footage has just been released:

His timing was fortuitous in one way, but unfortunate and kind of hilarious in another. The driver of the SUV, 43-year-old Ellen Sager, was opening her door to speak to the patrolman at the exact time that the deer was charging her vehicle, local Fox affiliate WTFX reported.

So, wham-o, it’s deer vs. human! And the deer briefly won, inflicting his horned vengeance on Sager’s knee. In the end, though, Sager’s injury was minor, while the deer’s proved fatal. The animal “succumbed to its injuries as a result of the impact with the vehicle.”

If it’s any consolation (and, really, it’s not) he died an honorable death on the field of battle and became a viral video star who will be celebrated for as long as one day, depending on the whims of the news cycle.