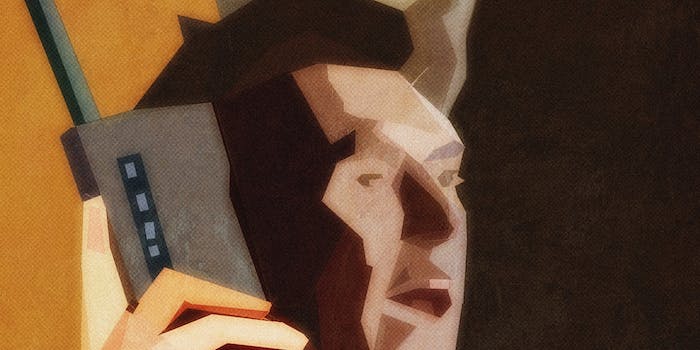 Apple is killing voicemails—and it's about damn time.

We all have friends whose voice mailboxes are either full or haven’t been set up in the first place. But can you blame them? The only thing worse than getting a phone call in 2015 is retrieving a voicemail. I became one of those bad friends a long time ago: I shut off my mailbox and I never looked back.

Now Apple, which has a history of abandoning technologies like the floppy disk before they’ve fully expired, is here to kill voicemail for us. According to Business Insider, Apple is hoping to release a new service in 2016 that will allow Siri to answer your calls, transcribe short messages, and send them to you in text form. Voilà, no more voicemail for iPhone users! And when Apple gives up on something, the rest of the world will soon follow.

All I can say is this: Good riddance. I will shed no tears at the funeral for voicemail. It’s about time we rid ourselves of this awkward and increasingly irrelevant form of communication. Voicemail is the last vestige of a time when people used phones as phones rather than as computers. That era is over now, and voice mail is just one more obsolete technology that no one will miss.

As Business Insider notes, Apple’s Siri-driven solution to voicemail is brilliant because some people like to leave voicemails—but most people don’t like to receive them. Annoying voicemail-leavers will still be able to blab to their heart’s content, but voicemail-receivers can simply open a text instead of finding that voicemail app in your phone that you last opened three months ago when the dentist’s office left you that message that you have never deleted.

The only thing worse than getting a phone call in 2015 is retrieving a voicemail.

Apple’s idea is not necessarily new, either. Verizon has implemented visual voicemail on both Android and Apple phones (although the service’s text translation leaves something to be desired). It also comes with a monthly fee—an added inconvenience for a service intended to make your life more convenient.

But killing the voicemail isn’t just a matter of personal convenience, it’s a way to boost efficiency as well. In a digitally connected era, voicemails interrupt an otherwise steady flow of communication by, for example, forcing you to find a pen to write down a phone number that could have been sent to you in an e-mail. Voicemails slow you down and demand dedicated attention, while texts allow you to keep moving and digest information at your own pace.

Major corporations seem to agree, too. Earlier this year, JPMorgan Chase and Coca-Cola did away with voicemails for the majority of their employees. Employees didn’t just accept this policy—they begged for it to be instituted, because voicemail is so “annoying,” as they put it. As NPR reports, Chase may save $8 million a year by axing a technology that no one wanted anyway. It might not save you millions of dollars, but chances are you wouldn’t miss voicemail, either.

At this point, voicemail is one of the last telephone-like functions that we have to use on the devices that we still refer to somewhat inaccurately as “phones.” We’ve all but killed the phone call. According to Pew Research Center polling, texting is now a more frequently-used smartphone function among adults 18 to 49 than voice calling. By now, the joke that young people only text and never talk on the phone has become common etiquette, but the preference exists for good reason: Phone calls are an irritating distraction.

Consider, for example, that companies like Comcast force people to call in to cancel their service, essentially as a form of punishment. It’s not unlikely that you’ll have to take time out of your workday to spend 10 to 15 minutes dialing, holding, and waiting for a representative who can then process a request that you could have done with a press of a button. Canceling online is not only faster—it also saves you getting hassled by the Comcast rep from hell.

There are some people, though, who are nostalgic for the days when oral forms of telecommunication were a more important part of our culture. Back in 2012 as texting was starting to overtake the phone call, Time’s Jeffrey Kluger argued that we should all “throw in a little Skyping or Facetime” to ensure that we maintain basic social skills. But is the death of voice communication really about social skills, or is it about engaging with the world in a different way?

In the fifth season of Louie, the comedian takes his daughter Lily to a Broadway play, who spends the latter half of the performance on her phone. Under the assumption that she’s not paying attention to the tragic ending, C.K. insists on taking away Lily’s cellphone. But she rebuffs him. “You saw me reading about the play,” she retorts. “Just because I can appreciate something on two levels, doesn’t mean I don’t deserve my phone.”

Voicemails slow you down and demand dedicated attention, while texts allow you to keep moving and digest information at your own pace.

What looks like a distracted, text-driven way of engaging with the universe is actually just a different way of processing information. It’s not that we are no longer having conversations anymore but that our technologies are shaping those conversations, as they always have.

And as time goes on, less of those conversations still require our phones to behave like phones. Even the standard-issue SMS is starting to become irrelevant. Since last year, Facebook has required its users to use the separate Messenger app for messaging. Zuckerberg’s rationale was to allow for a nuanced texting experience: “Messaging is one of the few things people do more than social networking. In some countries 85 percent of people are on Facebook, but 95 percent use SMS or messaging.”

We all balked at the idea of having to install a separate app on our phones—but now many of us have grown accustomed to using Messenger, Google Hangouts, or the Facebook-owned WhatsApp when we need to message a friend. Why? The same reason we quit talking on the phone: These apps are easier, they’re more efficient, and they don’t require a cellular connection, just WiFi.

As phone calls and even text messaging start to go out of style, it’s a wonder that voicemail even survived until 2015. Its impending death at the hands of Apple is long overdue. Leaving a voicemail for someone isn’t just inefficient, it’s almost an insult given how many instantaneous and time-saving forms of communication we have at our disposal. Phones aren’t really phones anymore but that’s OK. Let’s accept it, move on, and quit asking people, “Did you get my voicemail?”

No, I didn’t get your voicemail. I never will.

Corey Burke is an alumna of CUNY City College and works in reproductive justice in Atlanta. She spends her spare moments watching cute YouTube videos of whippets. You can tweet her @CoreyBurke.