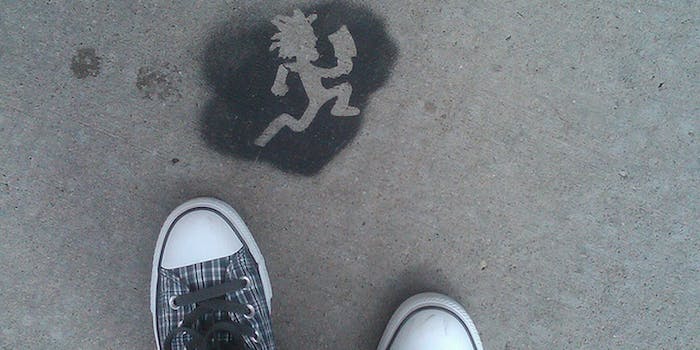 Man found dead at the Gathering of the Juggalos

A 24-year-old man was found dead in a tent on Friday afternoon.

The Gathering of the Juggalos, the annual festival for Insane Clown Posse fans, got underway Wednesday in Cave-in-Rock, Ill., and one death has already been reported.

According to the Southern Illinoisan, a coroner confirmed that a 24-year-man was found dead in a tent on Friday afternoon. The cause has not been released, though it is thought to be a heroin overdose. His identity has not been disclosed.

The “drug bridge” has long been a feature of the Gathering, an area on the festival grounds where drugs are known to be sold, even though cars are allegedly searched before entering the camp site. According to the Riverfront Times, the man sought refuge in a stranger’s tent after visiting the bridge:

“When the owner of the tent, who admitted that he had taken mescaline earlier in the day, returned around 2 p.m. to check on the man, he found that the body was cold. He explained that he went to lift the man’s arm up (which reportedly displayed track marks) to check his pulse, but when he did so “the guy’s whole body came up — rigor mortis had begun to set in — and blood came out of his mouth.’”

The bridge has since been blocked off, but the Gathering continues.

It’s been reported that 25I-NBOMe, a chemical hallucinogen, is the popular drug at the Gathering this year. The Hardin County Sheriff’s Department said there have also been 10 suspected overdoses and that a female EMT was attacked by a patient suspected of overdosing. This is the fourth reported death at the Gathering since moving to its current location in Hardin County.