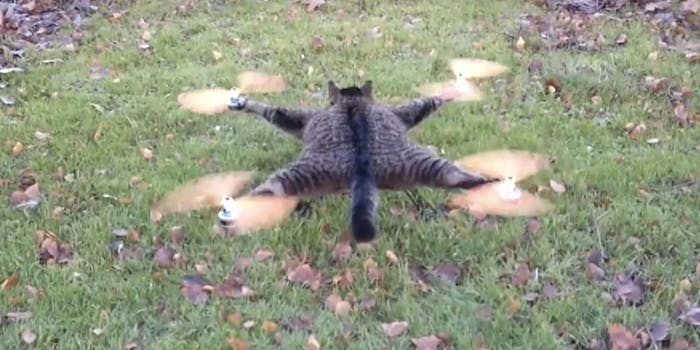 His current project is a helicopter cow for people to ride.

Despite meticulously outfitting drones with the bodies of dead animals, Bart Jansen has no idea how to fly them.

Jansen is one half of Copter Company, a Netherlands-based company that turns taxidermied animals into working drones. It’s a side pursuit; he installs solar panels for a living.

“[For the drones,] I team up with technical engineer Arjen Beltman,” Jansen told the Daily Dot via email. “[I do] the skins and the body shape, Arjen builds in the electronics and everything we need for it to work, then I get the contraptions back, put the skins around [them], and retouch until finished. Arjen is also the pilot, I cannot fly drones.”

Jansen says it’s simply a matter of not having enough time, though he might learn “some day.”

The duo’s weird pursuits are not limited to drones. They previously strapped a shark to a rocket and dubbed it “Sharkjet.” They’re currently turning a badger into a submarine they’ve already named “Das Boot,” a play on the famed 1981 submarine movie and the Dutch word for badger: “das.”

As for the immediate present, Jansen and Beltman are contemplating how to turn a cow into a helicopter.

“Mancopter,” a helicopter designed to transport one person, “might be a cow,” Jansen tells us. “At least we need an animal that can actually fit the person relatively [easily], and is wide enough to get the propellers out in a square that has the best proportions for steady flight.”

While these airborne pursuits have generally grown in size (they started with a cat, then an ostrich), Jansen says that it’d be possible to make quite small animals into drones. “We could go as small as the smallest components would let us, I reckon,” he said. “We have been thinking about making a hatchling swallow fly, which is about 3 cm in length.”

Jansen first gained viral notoriety with Orvillecopter, his 2012 drone creation that saw his cat Orville—who had been fatally struck by a car—live again as an unmanned autonomous vehicle. Orville happened to be named after Orville Wright, one of the Wright brothers who helped lay the foundation for modern flight.

The cat drone generated widespread outrage the moment its paws left the ground under propeller power, but Jansen has historically courted controversy. He’s responsible for publicly reimagining the burka as an American flag at a time when the religious garment was being hotly debated in his native Netherlands. He collaborated with painter Lars Reinbound to redo The Last Supper into a dishwashing line. And his short film “Pussy Destructor” features a cat tossed around violently in a laundry machine that eventually rips itself apart; the cat emerges unharmed. 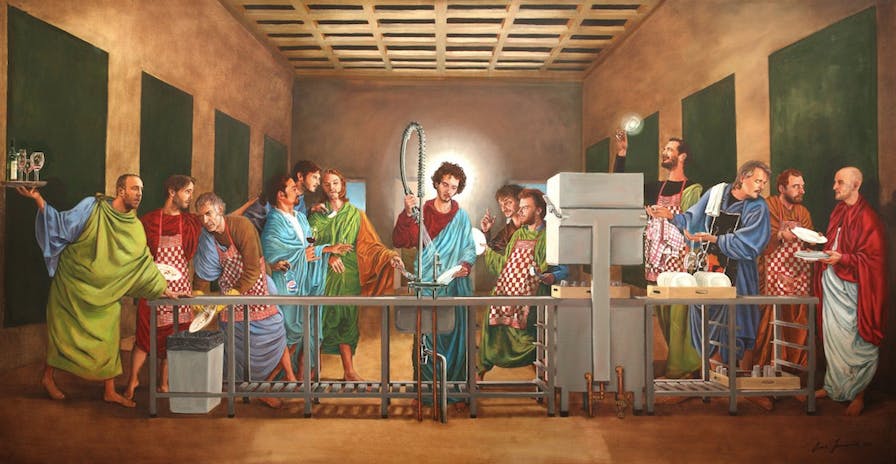 The creations are so surreal that even the designer himself acknowledges it: “I feel that our inventions do not need to be pranked with, they are weird enough as they are.”