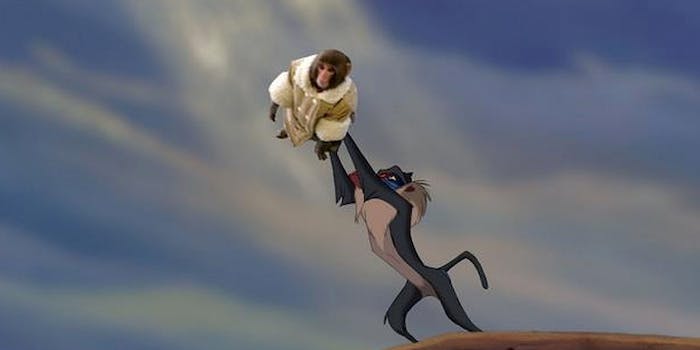 The handlers of Darwin, the adorable monkey that showed up at a Toronto-area Ikea last winter, are back in court this morning.

If the Canadian community is going to gloss over the legal ramifications concerning the mayor of the country’s largest city possibly smoking crack-cocaine, the least they can do is show some degree of renewed affection for the turbulent state of Darwin the Ikea Monkey.

You remember Darwin, right? He’s the monkey that showed up at a Toronto-area Ikea last winter. The little guy’s handlers are back in court this morning, fighting tooth and nail with a primate sanctuary over who holds the rights to hold the monkey.

Today actually marks the third time that original Darwin owner Yasmin Nakhuda has gone to court in an effort to reclaim ownership of the Japanese snow macaque. She filed for temporary ownership both times prior, coming away unsuccessful in each bid. Today, she’s after permanent ownership.

Excited? Let’s get you caught up to speed on all that’s happened in this crazy case of monkey business.

Where did the IKEA Monkey first show up?

At an IKEA, dummy. It was at a Toronto IKEA in December 2012 that Darwin the IKEA Monkey first burst onto the Internet’s scene wearing a khaki-colored shearling coat and an unsoiled diaper. The monkey climbed out of a car and just started scampering around the parking lot, pretty much, walking to and fro like a human with corgi legs until a woman named Bronwyn Page had the foresight to snap a TwitPic of the guy.

Umm saw a monkey in the #ikea parking lot. twitter.com/broniewyn/stat…

From there it was history. Store employees cornered the snow macaque until he was escorted off the property and taken to animal services.

Did he have the Internet going nuts?

Did Rule 34 come into effect with this monkey?

What’s the deal with Bronwyn Page these days?

Girl got crazy and tried to capitalize on this monkey’s fame. In the weeks following her “discovery” of the IKEA Monkey, Bronwyn Page, a “casual” associate producer for CBC Music, changed her Twitter biographer such that it read “I saw the #IkeaMonkey,” opened a Facebook fan page about her experience seeing said monkey, and jumped onto Reddit for an IAmA, which did not go so well. Recently, Page has returned to her more civic ways, tweeting about Toronto’s waterfront and Seinfeld trivia nights, neither of which she seems to be attempting to capitalize upon.

What’s the monkey say about all this?

Monkeys can’t talk, dude, but we would imagine that Darwin wouldn’t be too psyched about all the hullabaloo that his existence has brought about. Monkeys are docile creatures who chill in nature and generally don’t like it when they’re the primary concern of courtroom proceedings.